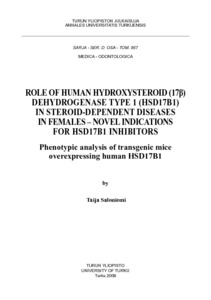 Hormone-dependent diseases, e.g. cancers, rank high in mortality in the modern world, and thus, there is an urgent need for new drugs to treat these diseases. Although the diseases are clearly hormone-dependent, changes in circulating hormone concentrations do not explain all the pathological processes observed in the diseased tissues. A more inclusive explanation is provided by intracrinology – a regulation of hormone concentrations at the target tissue level. This is mediated by the expression of a pattern of steroid-activating and -inactivating enzymes in steroid target tissues, thus enabling a concentration gradient between the blood circulation and the tissue.

Hydroxysteroid (17beta) dehydrogenases (HSD17Bs) form a family of enzymes that catalyze the conversion between low active 17-ketosteroids and highly active 17beta-hydroxysteroids. HSD17B1 converts low active estrogen (E1) to highly active estradiol (E2) with high catalytic efficiency, and altered HSD17B1 expression has been associated with several hormone-dependent diseases, including breast cancer, endometriosis, endometrial hyperplasia and cancer, and ovarian epithelial cancer. Because of its putative role in E2 biosynthesis in ovaries and peripheral target tissues, HSD17B1 is considered to be a promising drug target for estrogen-dependent diseases.

A few studies have indicated that the enzyme also has androgenic activity, but they have been ignored. In the present study, transgenic mice overexpressing human HSD17B1 (HSD17B1TG mice) were used to study the effects of the enzyme in vivo. Firstly, the substrate specificity of human HSD17B1 was determined in vivo. The results indicated that human HSD17B1 has significant androgenic activity in female mice in vivo, which resulted in increased fetal testosterone concentration and female disorder of sexual development appearing as masculinized phenotype (increased anogenital distance, lack of nipples, lack of vaginal opening, combination of vagina with urethra, enlarged Wolffian duct remnants in the mesovarium and enlarged female prostate). Fetal androgen exposure has been linked to polycystic ovary syndrome (PCOS) and metabolic syndrome during adulthood in experimental animals and humans, but the genes involved in PCOS are largely unknown. A putative mechanism to accumulate androgens during fetal life by HSD17B1 overexpression was shown in the present study.

Furthermore, as a result of prenatal androgen exposure locally in the ovaries, HSD17B1TG females developed ovarian benign serous cystadenomas in adulthood. These benign lesions are precursors of low-grade ovarian serous tumors. Ovarian cancer ranks fifth in mortality of all female cancers in Finland, and most of the ovarian cancers arise from the surface epithelium. The formation of the lesions was prevented by prenatal antiandrogen treatment and by transplanting wild type (WT) ovaries prepubertally into HSD17B1TG females. The results obtained in our non-clinical TG mouse model, together with a literature analysis, suggest that HSD17B1 has a role in ovarian epithelial carcinogenesis, and especially in the development of serous tumors. The role of androgens in ovarian carcinogenesis is considered controversial, but the present study provides further evidence for the androgen hypothesis. Moreover, it directly links HSD17B1-induced prenatal androgen exposure to ovarian epithelial carcinogenesis in mice.

As expected, significant estrogenic activity was also detected for human HSD17B1. HSD17B1TG mice had enhanced peripheral conversion of E1 to E2 in a variety of target tissues, including the uterus. Furthermore, this activity was significantly decreased by treatments with specific HSD17B1 inhibitors. As a result, several estrogen-dependent disorders were found in HSD17B1TG females. Here we report that HSD17B1TG mice invariably developed endometrial hyperplasia and failed to ovulate in adulthood. As in humans, endometrial hyperplasia in HSD17B1TG females was reversible upon ovulation induction, triggering a rise in circulating progesterone levels, and in response to exogenous progestins. Remarkably, treatment with a HSD17B1 inhibitor failed to restore ovulation, yet completely reversed the hyperplastic morphology of epithelial cells in the glandular compartment. We also demonstrate that HSD17B1 is expressed in normal human endometrium, hyperplasia, and cancer. Collectively, our non-clinical data and literature analysis suggest that HSD17B1 inhibition could be one of several possible approaches to decrease endometrial estrogen production in endometrial hyperplasia and cancer.

HSD17B1 expression has been found in bones of humans and rats. The non-clinical data in the present study suggest that human HSD17B1 is likely to have an important role in the regulation of bone formation, strength and length during reproductive years in female mice. Bone density in HSD17B1TG females was highly increased in femurs, but in lesser amounts also in tibias. Especially the tibia growth plate, but not other regions of bone, was susceptible to respond to HSD17B1 inhibition by increasing bone length, whereas the inhibitors did not affect bone density. Therefore, HSD17B1 inhibitors could be safer than aromatase inhibitors in regard to bone in the treatment of breast cancer and endometriosis. Furthermore, diseases related to improper growth, are a promising new indication for HSD17B1 inhibitors.