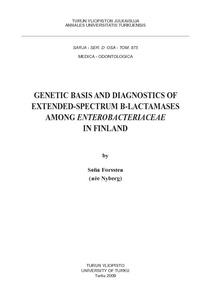 Since the introduction of antibiotic agents, the amount and prevalence of Beta-lactam resistant enterobacteria has become an increasing problem. Many enterobacteria are opportunistic pathogens that easily acquire resistance mechanisms and genes, which make the situation menacing. These bacteria have acquired resistance and can hydrolyse extended spectrum cephalosporins and penicillins by producing enzymes called extended-spectrum Beta-lactamases (ESBLs). ESBL-producing bacteria are most commonly found in the gastro-intestinal tract of colonised patients. These resistant strains can be found in both health-care associated and community-acquired isolates. The detection and treatment of infections caused by bacteria producing ESBLs are problematic.

This study investigated the genetic basis of extended-spectrum Beta-lactamases in Enterobacteriaceae, especially in Escherichia coli and Klebsiella pneumoniae isolates. A total of 994 Finnish Enterobacteriaceae strains, collected at 26 hospital laboratories, during 2000 and 2007 were analysed. For the genetic basis studies, PCR, sequencing and pyrosequencing methods were optimised. In addition, international standard methods, the agar dilution and disk diffusion methods were performed for the resistance studies, and the susceptibility of these strains was tested for antimicrobial agents that are used for treating patients.

The genetic analysis showed that blaCTX-M was the most prevalent gene among the E. coli isolates, while blaSHV-12 was the most common Beta-lactamase gene in K. pneumoniae. The susceptibility testing results showed that about 60% of the strains were multidrug resistant. The prevalence of ESBL-producing isolates in Finland has been increasing since 2000. However, the situation in Finland is still much better than in many other European countries.