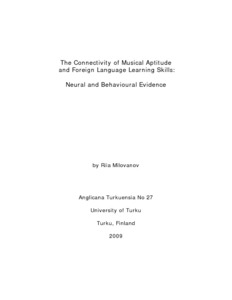 Given the structural and acoustical similarities between speech and music, and possible overlapping cerebral structures in speech and music processing, a possible relationship between musical aptitude and linguistic abilities, especially in terms of second language pronunciation skills, was investigated. Moreover, the laterality effect of the mother tongue was examined with both adults and children by means of dichotic listening scores. Finally, two event-related potential studies sought to reveal whether children with advanced second language pronunciation skills and higher general musical aptitude differed from children with less-advanced pronunciation skills and less musical aptitude in accuracy when preattentively processing mistuned triads and music / speech sound durations.

The results showed a significant relationship between musical aptitude, English language pronunciation skills, chord discrimination ability, and sound-change-evoked brain activation in response to musical stimuli (durational differences and triad contrasts). Regular music practice may also have a modulatory effect on the brain’s linguistic organization and cause altered hemispheric functioning in those who have regularly practised music for years. Based on the present results, it is proposed that language skills, both in production and discrimination, are interconnected with perceptual musical skills.