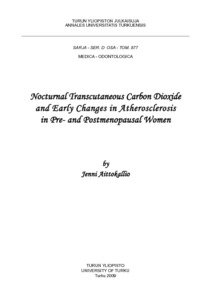 The nocturnal TcCO2 profile seems to contain significant information, which is associated with early changes in cardiovascular diseases in middle-aged women. TcCO2 might not only measure the tissue carbon dioxide levels, but the TcCO2 signal variation may also reflect peripheral vasodynamic events caused by increased sympathetic activity during sleep.