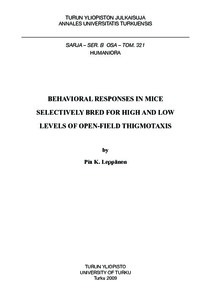 In animal psychology, the open-field (OF) test is a traditional method for studying different aspects of rodent behavior, with thigmotaxis (i.e., wallseeking behavior) being one of the best validated OF parameters employed to measure emotionality. The main purpose of the present study was to investigate the selection response in mice selectively bred for high and low levels of OF thigmotaxis (the HOFT and LOFT lines, respectively). The mice (N = 2048) were selected for 23 generations, resulting in bidirectional phenotypic divergence between the two lines; that is, the HOFT mice were more thigmotactic (i.e., more emotional) than the LOFT mice across the different generations. The origin of the line difference in thigmotaxis was further investigated by using the crossfostering paradigm, with the results suggesting that the divergence between the two lines was primarily innate in origin and not influenced by differing maternal behavior. The stability of the selection trait was examined by testing the animals at different ages as well as in varying conditions. The results indicated that the line difference in thigmotaxis was not affected by age at the time of testing, and it also persisted in the different OF testing situations as well as during pregnancy and lactation. The examination of a possible coselection of other characteristics revealed that the more thigmotactic HOFT mice lived longer than the less thigmotactic LOFT mice. In addition, the HOFT mice tended to rear and explore less than the LOFT mice, supporting the general assumption that emotionality and exploration are inversely related. The two lines did not generally differ in ambulation and defecation, that is, in the traditional OF indexes of emotionality, conforming to the suggestion that emotionality is a multidimensional construct. The effects of sex on different OF parameters were also assessed, with the results suggesting that among the HOFT and LOFT lines, the female mice were more emotional than the male mice. The examination of the temporal changes in the HOFT and LOFT lines’ OF behavior revealed some contradictory findings that also partially conflicted with general assumptions. Although this study did not show prominent differences in maternal responsiveness between the HOFT and LOFT mothers, the results suggested that the line divergence in emotionality was more pronounced in the presence of a pup after parturition than during pregnancy. The present study clearly demonstrates that OF thigmotaxis is a strong characteristic for producing two diverging lines of mice. The difference in thigmotaxis between the selectively bred HOFT and LOFT mice seemed to be a stable and robust feature of these animals, and it appeared to stem from a genetic background.