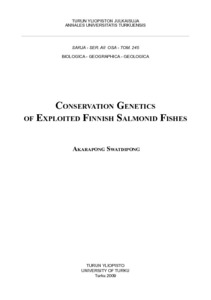 Genetic diversity is one of the levels of biodiversity that the World Conservation Union (IUCN) has recognized as being important to preserve. This is because genetic diversity is fundamental to the future evolution and to the adaptive flexibility of a species to respond to the inherently dynamic nature of the natural world. Therefore, the key to maintaining biodiversity and healthy ecosystems is to identify, monitor and maintain locally-adapted populations, along with their unique gene pools, upon which future adaptation depends. Thus, conservation genetics deals with the genetic factors that affect extinction risk and the genetic management regimes required to minimize the risk. The conservation of exploited species, such as salmonid fishes, is particularly challenging due to the conflicts between different interest groups.

In this thesis, I conduct a series of conservation genetic studies on primarily Finnish populations of two salmonid fish species (European grayling, Thymallus thymallus, and lake-run brown trout, Salmo trutta) which are popular recreational game fishes in Finland. The general aim of these studies was to apply and develop population genetic approaches to assist conservation and sustainable harvest of these populations. The approaches applied included: i) the characterization of population genetic structure at national and local scales; ii) the identification of management units and the prioritization of populations for conservation based on evolutionary forces shaping indigenous gene pools; iii) the detection of population declines and the testing of the assumptions underlying these tests; and iv) the evaluation of the contribution of natural populations to a mixed stock fishery.

Based on microsatellite analyses, clear genetic structuring of exploited Finnish grayling and brown trout populations was detected at both national and local scales. Finnish grayling were clustered into three genetically distinct groups, corresponding to northern, Baltic and south-eastern geographic areas of Finland. The genetic differentiation among and within population groups of grayling ranged from moderate to high levels. Such strong genetic structuring combined with low genetic diversity strongly indicates that genetic drift plays a major role in the evolution of grayling populations. Further analyses of European grayling covering the majority of the species’ distribution range indicated a strong global footprint of population decline. Using a coalescent approach the beginning of population reduction was dated back to 1 000-10 000 years ago (ca. 200-2 000 generations). Forward simulations demonstrated that the bottleneck footprints measured using the M ratio can persist within small populations much longer than previously anticipated in the face of low levels of gene flow. In contrast to the M ratio, two alternative methods for genetic bottleneck detection identified recent bottlenecks in six grayling populations that warrant future monitoring. Consistent with the predominant role of random genetic drift, the effective population size (Ne) estimates of all grayling populations were very low with the majority of Ne estimates below 50. Taken together, highly structured local populations, limited gene flow and the small Ne of grayling populations indicates that grayling populations are vulnerable to overexploitation and, hence, monitoring and careful management using the precautionary principles is required not only in Finland but throughout Europe.

Population genetic analyses of lake-run brown trout populations in the Inari basin (northernmost Finland) revealed hierarchical population structure where individual populations were clustered into three population groups largely corresponding to different geographic regions of the basin. Similar to my earlier work with European grayling, the genetic differentiation among and within population groups of lake-run brown trout was relatively high. Such strong differentiation indicated that the power to determine the relative contribution of populations in mixed fisheries should be relatively high. Consistent with these expectations, high accuracy and precision in mixed stock analysis (MSA) simulations were observed. Application of MSA to indigenous fish caught in the Inari basin identified altogether twelve populations that contributed significantly to mixed stock fisheries with the Ivalojoki river system being the major contributor (70%) to the total catch. When the contribution of wild trout populations to the fisheries was evaluated regionally, geographically nearby populations were the main contributors to the local catches. MSA also revealed a clear separation between the lower and upper reaches of Ivalojoki river system – in contrast to lower reaches of the Ivalojoki river that contributed considerably to the catch, populations from the upper reaches of the Ivalojoki river system (>140 km from the river mouth) did not contribute significantly to the fishery. This could be related to the available habitat size but also associated with a resident type life history and increased cost of migration. The studies in my thesis highlight the importance of dense sampling and wide population coverage at the scale being studied and also demonstrate the importance of critical evaluation of the underlying assumptions of the population genetic models and methods used. These results have important implications for conservation and sustainable fisheries management of Finnish populations of European grayling and brown trout in the Inari basin.