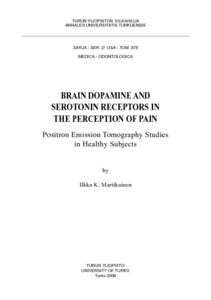 The aim of this study was to assess the potential role of brain dopamine and serotonin in determining experimental pain sensitivity in humans using positron emission tomography (PET) and psychophysical methods. A total of 39 healthy subjects participated in the study, and PET imaging was performed to assess brain dopamine D2/D3 and serotonin 5-HT1A receptor availability. In a separate session, sensitivity to pain and touch was assessed with traditional psychophysical methods, allowing the evaluation of potential associations between D2/D3 and 5-HT1A binding and psychophysical responses. The subjects’ responses were also analyzed according to Signal Detection Theory, which enables separate assessment of the subject’s discriminative capacity (sensory factor) and response criterion (non-sensory factor).

The results suggest that brain D2/D3 receptors and 5-HT1A receptors modulate sensitivity to pain and that the pain modulatory effects may, at least partly, be attributed to influences on the response criterion. 5-HT1A receptors are also involved in the regulation of touch by having an effect on discriminative capacity.