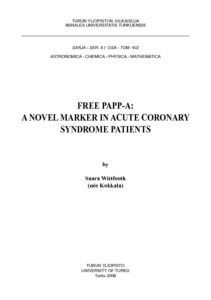 In recent years, one important objective of cardiovascular research has been to find new markers that would improve the risk stratification and diagnosis of patients presenting with symptoms of acute coronary syndrome (ACS). Pregnancy-associated plasma protein A (PAPP-A) is a large metalloproteinase involved in insulin-like growth factor signalling. It is expressed in various tissues and seems to be involved in many physiological and pathological processes, such as folliculogenesis, bone formation, wound healing, pregnancy and atherosclerosis. The aim of this thesis was to investigate PAPP-A in ACS patients.

Circulating concentrations of PAPP-A had been previously shown to be elevated in ACS. In this study it was revealed that the form of PAPP-A causing this elevation was the free noncomplexed PAPP-A. Thus, the form of PAPP-A in the circulation of ACS patients differed from the complexed PAPP-A form abundantly present in the circulation during pregnancy. A point-of-care method based on time-resolved immunofluorometric assays was developed, which enabled the rapid detection of free PAPP-A. The method was found to perform well with serum and heparin plasma samples as well as with heparinized whole blood samples. With this method the concentrations of free PAPP-A in healthy individuals were shown to be negligible. When the clinical performance of the method was evaluated with serum samples from ACS patients, it was shown that the free PAPP-A concentration in the admission sample was an independent predictor of myocardial infarction and death. Moreover, as a prognostic marker, free PAPP-A was revealed to be superior to total PAPPA, i.e. the combination of free and complexed PAPP-A, which has been measured by the other groups in this field.

As heparin products are widely used as medication in ACS patients, the effect of heparin products on free PAPP-A molecule and circulating concentrations were also investigated in this study. It was shown that intravenous administration of low molecular weight or unfractionated heparin elicits a rapid release of free PAPP-A into the circulation in haemodialysis patients and patients undergoing angiography. Moreover, the interaction between PAPP-A and heparin was confirmed in gel filtration studies. Importantly, the patients included in the clinical evaluation of the free PAPP-A detection method developed had not received any heparin product medication before the admission sample and thus the results were not affected by the heparin effect.

In conclusion, free PAPP-A was identified as a novel marker associated with ACS. The point-of-care methods developed enable rapid detection of this molecule which predicts adverse outcome when measured in the admission sample of ACS patients. However, the effect revealed of heparin products on circulating PAPP-A concentrations should be acknowledged when further studies are conducted related to free or total PAPP-A in ACS.