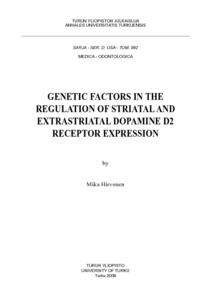 Positron emission tomography (PET) studies on healthy individuals have revealed a marked interindividual variability in striatal dopamine D2 receptor density that can be partly accounted for by genetic factors. The examination of the extrastriatal lowdensity D2 receptor populations has been impeded by the lack of suitable tracers. However, the quantification of these D2 receptor populations is now feasible with recently developed PET radioligands.

The objective of this thesis was to study brain neurobiological correlates of common functional genetic variants residing in candidate genes relevant for D2 receptor functioning. For this purpose, healthy subjects were studied with PET imaging using [11C]raclopride and [11C]FLB457 as radioligands. The candidate genes examined in this work were the human D2 receptor gene (DRD2) and the catechol-Omethyltransferase gene (COMT). The region-specific genotypic influences were explored by comparing D2 receptor binding properties in the striatum, the cortex and the thalamus. As an additional study objective, the relationship between cortical D2 receptor density and a cognitive phenotype i.e. verbal memory and learning was assessed.

The results of this study suggest that the C957T and the TaqIA genotypes have region-specific neurobiological correlates in brain dopamine D2 receptor availability in vivo. The biological mechanisms underlying these findings are unclear, but they may be related to the region-specific regulation of dopamine neurotranssion, gene/receptor expression and epigenesis. These findings contribute to the understanding of the genetic regulation of dopamine and D2 receptor-related brain functions in vivo in man. In addition, the results provide potentially useful endophenotypes for genetic research on psychiatric and neurological disorders.