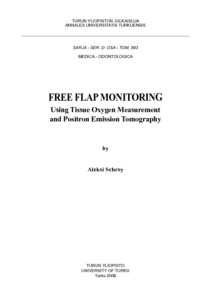 Aims:This study was carried out to evaluate the feasibility of two different methods to determine free flap perfusion in cancer patients undergoing major reconstructive surgery. The hypotheses was that low perfusion in the flap is associated with flap complications.

Patients and methods: Between August 2002 and June 2008 at the Department of Otorhinolaryngology – Head and Neck Surgery, Department of Surgery, and at the PET Centre, Turku, 30 consecutive patients with 32 free flaps were included in this study. The perfusion of the free microvascular flaps was assessed with positron emission tomography (PET) and radioactive water ([15O] H2O) in 40 radiowater injections in 33 PET studies. Furthermore, 24 free flaps were monitored with a continuous tissue oxygen measurement using flexible polarographic catheters for an average of three postoperative days.

Results: Of the 17 patients operated on for head and neck (HN) cancer and reconstructed with 18 free flaps, three re-operations were carried out due to poor tissue oxygenation as indicated by ptiO2 monitoring results and three other patients were reoperated on for postoperative hematomas in the operated area. Blood perfusion assessed with PET (BFPET) was above 2.0 mL / min / 100 g in all flaps and a low flap-to-muscle BFPET ratio appeared to correlate with poor survival of the flap. Survival in this group of HN cancer patients was 9.0 months (median, range 2.4-34.2) after a median follow-up of 11.9 months (range 1.0-61.0 months). Seven HN patients of this group are alive without any sign of recurrence and one patient has died of other causes. All of the 13 breast reconstruction patients included in the study are alive and free of disease at a median follow-up time of 27.4 months (range 13.9-35.7 months). Re-explorations were carried out in three patients due data provided by ptiO2 monitoring and one re-exploration was avoided on the basis of adequate blood perfusion assessed with PET. Two patients had donorsite morbidity and 3 patients had partial flap necrosis or fat necrosis. There were no total flap losses.

Conclusions: PtiO2 monitoring is a feasible method of free flap monitoring when flap temperature is monitored and maintained close to the core temperature. When other monitoring methods give controversial results or are unavailable, [15O] H2O PET technique is feasible in the evaluation of the perfusion of the newly reconstructed free flaps.