Foodstuffs and medicines as legal categories in the EU and China. Functional foods as a borderline case

Foodstuffs and medicines as legal categories in the EU and China. Functional foods as a borderline case 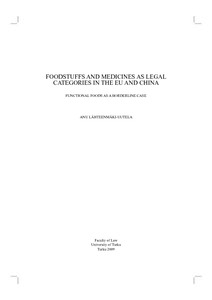 The thesis discusses the regulation of foodstuffs and medicines, and particularly the regulation of functional foods. Legal systems investigated are the EU and China. Both are members of the WTO and Codex Alimentarius, which binds European and Chinese rules together. The study uses three Chinese berries as case examples of how product development faces regulation in practice. The berries have traditional uses as herbal medicines. Europe and China have similar nutrition problems to be resolved, such as obesity, cardiovascular disease, and diabetes. The three berries might be suitable raw materials for functional foods. Consumer products with health-enhancing functions, such as lowering blood pressure, might legally be classifi ed either as foodstuffs or medicines. The classifi cation will depend on functions and presentation of the product. In our opinion, food and medicine regulation should come closer together so the classifi cation issue would no longer be an issue.

Safety of both foodstuffs and medicines is strictly regulated. With medicines, safety is a more relative concept, where benefi ts of the product are compared to side-effects in thorough scientifi c tests and trials. Foods, on the other hand, are not allowed to have side-effects. Hygiene rules and rules on the use of chemicals apply. In China, food safety is currently at focus as China has had several severe food scandals. Newly developed foods are called novel foods, and are specifi cally regulated. The current European novel food regulation from 1997 treats traditional third country products as novel. The Chinese regulation of 2007 also defi nes novel foods as something unfamiliar to a Chinese consumer. The concepts of novel food thus serve a protectionist purpose.

As regards marketing, foods are allowed to bear health claims, whereas medicines bear medicinal claims. The separation is legally strict: foods are not to be presented as having medicinal functions. European nutrition and health claim regulation exists since 2006. China also has its regulation on health foods, listing the permitted claims and how to substantiate them. Health claims are allowed only on health foods. The European rules on medicines include separate categories for herbal medicines, traditional herbal medicines, and homeopathic medicines, where there are differing requirements for scientifi c substantiation. The scientifi c and political grounds for the separate categories provoke criticism.

At surface, the Chinese legal system seems similar to the European one. To facilitate trade, China has enacted modern laws. Laws are needed as the country moves from planned economy to market economy: ‘rule of law’ needs to replace ‘rule of man’. Instead of being citizens, Chinese people long were subordinates to the Emperor. Confucius himself advised to avoid confl ict. Still, Chinese people do not and cannot always trust the legal system, as laws are enforced in an inconsistent manner, and courts are weak. In China, there have been problems with confl icting national and local laws. In Europe, the competence of the EU vs. the competence of the Member States is still not resolved, even though the European Commission often states that free trade requires harmonisation.

Food and medicine regulation is created by international organisations, food and medicine control agencies, standards agencies, companies and their organisations. Regulation can be divided in ‘hard law’ and ‘soft law’. One might claim that hard law is in crisis, as soft law is gaining importance. If law is out of fashion, regulation certainly isn’t. In the future, ‘law’ might mean a process where rules and incentives are created by states, NGOs, companies, consumers, and other stakeholders. ‘Law’ might thus refer to a constant negotiation between public and private actors. Legal principles such as transparency, equal treatment, and the right to be heard would still be important.