Development of Russian Ports in The Gulf of Finland

Development of Russian Ports in The Gulf of Finland 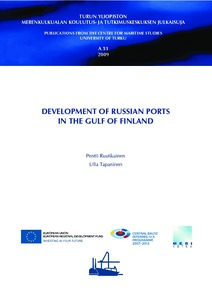 Russia has been one of the fastest developing economic areas in the world. Based on the GDP, the Russian economy grew evenly since the crisis in 1998 up till 2008. The growth in the gross domestic product has annually been some 5–10%. In 2007, the growth reached 8.1%, which is the highest figure after the 10% growth in 2000. Due to the growth of the economy and wage levels, purchasing power and consumption have been strongly increasing. The growing consumption has especially increased the imports of durables, such as passenger cars, domestic appliances and electronics. The Russian ports and infrastructure have not been able to satisfy the growing needs of exports and imports, which is why quite a large share of Russian foreign trade is going through third countries as transit transports. Finnish ports play a major role in transit transports to and from Russia. About 15% of the total value of Russian imports was transported through Finland in 2008.

The economic recession that started in autumn 2008 and continues to date has had an impact on the economic development of Russia. The export income has decreased, mainly due to the reduced world market prices of energy products (oil and gas) and raw minerals. Investments have been postponed, getting credit is more difficult than before, and the ruble has weakened in relation to the euro and the dollar. The imports are decreasing remarkably, and are not forecast to reach the 2008 volumes even in 2012. The economic crisis is reflected in Finland's transit traffic. The volume of goods transported through Finland to and from Russia has decreased almost in the same proportion as the imports of goods to Russia. The biggest risk threatening the development of the Russian economy over long term is its dependence on export income from oil, gas, metals, minerals and forest products, as well as the trends of the world market prices of these products.

Nevertheless, it is expected that the GDP of Russia will start to grow again in the forthcoming years due to the increased demand for energy products and raw minerals in the world. At the same time, it is obvious that the world market prices of these products will go up with the increasing demand. The increased income from exports will lead to a growth of imports, especially those of consumer goods, as the living standard of Russian citizens rises. The forecasts produced by the Russian Government concerning the economic development of Russia up till 2030 also indicate a shift in exported goods from raw materials to processed products, which together with energy products will become the main export goods of Russia. As a consequence, Russia may need export routes through third countries, which can be seen as an opportunity for increased transit transports through the ports of Finland.

The ports competing with the ports of Finland for Russian foreign trade traffic are the Russian Baltic Sea ports and the ports of the Baltic countries. The strongest competitors are the Baltic Sea ports handling containers. On the Russian Baltic Sea, these ports include Saint Petersburg, Kaliningrad and, in the near future, the ports of Ust-Luga and possibly Vyborg. There are plans to develop Ust-Luga and Vyborg as modern container ports, which would become serious competitors to the Finnish ports. Russia is aiming to redirect as large a share as possible of foreign trade traffic to its own ports. The ports of Russia and the infrastructure associated with them are under constant development. On the other hand, the logistic capacity of Russia is not able to satisfy the continually growing needs of the Russian foreign trade. The capacity problem is emphasized by a structural incompatibility between the exports and imports in the Russian foreign trade. Russian exports can only use a small part of the containers brought in with imports. Problems are also caused by the difficult ice conditions and narrow waterways leading to the ports.

It is predicted that Finland will maintain its position as a transit route for the Russian foreign trade, at least in the near future. The Russian foreign trade is increasing, and Russia will not be able to develop its ports in proportion with the increasing foreign trade. With the development of port capacity, cargo flows through the ports of Russia will grow. Structural changes in transit traffic are already visible. Firms are more and more relocating their production to Russia, for example as regards the assembly of cars and warehousing services. Simultaneously, an increasing part of transit cargoes are sent directly to Russia without unloading and reloading in Finland. New product groups have nevertheless been transported through Finland (textile products and tools), replacing the lost cargos. The global recession that started in autumn 2008 has influenced the volume of Russian imports and, consequently, the transit volumes of Finland, but the recession is not expected to be of long duration, and will thus only have a short-term impact on transit volumes.

The Finnish infrastructure and services offered by the logistic chain should also be ready to react to the changes in imported product groups as well as to the change in Russian export products in the future. If the development plans of the Russian economy are realized, export products will be more refined, and the share of energy and raw material products will decrease. The other notable factor to be taken into consideration is the extremely fast-changing business environment in Russia. Operators in the logistic chain should be flexible enough to adapt to all kinds of changes to capitalise on business opportunities offered by the Russian foreign trade for the companies and for the transit volumes of Finnish ports, also in the future.