Secondary Aural Symptoms in Relation to Cranio-Cervical and General Disorders

Secondary Aural Symptoms in Relation to Cranio-Cervical and General Disorders 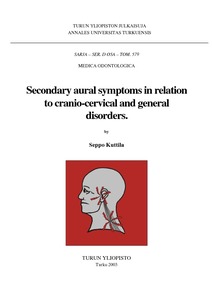 The present thesis comprises two study populations. The first study sample (SS1) consisted of 411 adults examined and interviewed at three annual visits. The second study sample (SS2) consisted of 1720 adults who filled in a mailed questionnaire about secondary otalgia, tinnitus and fullness of ears. In the second phase of the SS2, 100 subjects with otalgia were examined and interviewed by specialist in stomatognathic physiology and otorhinolaryngology. In the third phase, 36 subjects participated in a randomized, controlled and blinded trial of effectiveness of occlusal appliance on secondary otalgia, facial pain, headache and treatment need of temporomandibular disorders (TMD).

In patients with aural pain, tinnitus or fullness of ears, it is important to first rule out otologic and nasopharyngeal diseases that may cause the symptoms. If no explanation for aural symptoms is found, temporomandibular and cervical spine disorders should be rouled out to minimize unnecessary visits to a physician.