"IF ONLY I COULD" ~ "THERE IS ALWAYS A LOOPHOLE"? Hope and hopelessness experienced by the severely depressive and nondepressive

"IF ONLY I COULD" ~ "THERE IS ALWAYS A LOOPHOLE"? Hope and hopelessness experienced by the severely depressive and nondepressive 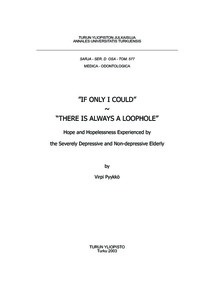 The aim of this research was to structure a conceptual model of hope and hopelessness based on dictionary definitions, and to verify this model on the basis of the experiences of the severely depressive and non-depressive elderly. This research has produced a substantive theory of hope and hopelessness which is based on the experiences of the depressive and non-depressive elderly, and on the concept analysis of hope and hopelessness based on English dictionary definitions. The patients who participated in the research were 65 years old and older men and women (n=22) who had been admitted to a psychiatric hospital because of major depression, and another group: the non-depressive elderly (n=21), who were recruited from the pensioners’ clubs. The data were collected in interviews using the Clinical Assessment Tool, developed by Farran, Salloway and Clark (1990) and Farran, Wilken and Popovich (1992), and it produced 553 pages of written text, which were analysed using the ATLAS/ti programme. ATLAS/ti is a tool for analysing qualitative data and is based on Grounded Theory. The medical and nursing records of the depressive elderly completed source triangulation. The concept analysis of hope and hopelessness was made on the basis of the definitions of English dictionaries (n=103), using semantic analysis and the ATLAS/ti programme. The most important hope-promoting factors were human relations, health and managing in everyday living. Autonomy, self-determination and feeling of security were highly appreciated among the elderly. Hopelessness, on the other hand, was most often associated with the same factors: human relations, health and everyday living. Especially, losses of significant others were experienced as strongly hope-diminishing. Old age had brought freedom from duties concerning others, but now, when you finally had an opportunity to enjoy yourself, you could not accomplish anything; you were clasped in the arms of total inability, depression had come. The most obvious difference in the life course of the depressive and nondepressive elderly was the abundance of traumatic experiences in the childhood and youth of the depressive elderly. The continuous circulation of fearful thoughts was almost touchable, and suicidality was described in connection with these thoughts. You were afraid to be awake and also to go to sleep. Managing day by day was the goal.
The research produced the Basic Social Process (BSP) of hope: achieving - maintaining - losing, which expresses a continuous balancing between Being without and Being with. The importance of the object of hope was combined with the amount of hope and disappointment. The process of approaching defined the realisation of hope and the process of withdrawal that of losing. Joy and security versus grief and insecurity defined the Being with and Being without. Two core categories were found. The first one “If only I could�? reflects lack of energy, lack of knowledge, lack of courage and lack of ability. The other one “There is always a loophole�? reflects deliberate tracing of possibilities and the belief in finding solutions, and managing.