Regulation of Spermatogenesis: Differentiation of GFP-labeled Stem Cells and the Function of Cytoplasmic Bridges

Regulation of Spermatogenesis: Differentiation of GFP-labeled Stem Cells and the Function of Cytoplasmic Bridges 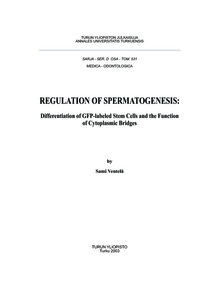 By using transgenic mice expressing enhanced-(E)GFP as a marker we have studied the expression and hormonal regulation of beta-actin and acrosin proteins in the developmentally different living male germ cells. Beta-actin was demonstrated in all male germ cells, whereas acrosin was expressed only in late meiotic and in postmeiotic cells. Follicle stimulating hormone stimulated b-actin-EGFP expression at stages I-VI and enhanced the formation of microtubules in spermatids and this way reduced the size of the acrosomic system. When EGFP expressing spermatogonial stem cells were transplanted into infertile mouse testis differentiation and the synchronized development of male germ cells could be observed during six months observation time. Each colony developed independently and maintained typical stage-dependent cell associations. Furthermore, if more than two colonies were fused, each of them was adjusted to one stage and synchronized. By studying living spermatids we were able to demonstrate novel functions for Golgi complex and chromatoid body in material sharing between neighbor spermatids. Immunosytochemical analyses revealed a transport of haploid cell specific proteins in spermatids (TRA54 and Shippo1) and through the intercellular bridges (TRA54). Cytoskeleton inhibitor (nocodazole) demonstrated the importance of microtubules in material sharing between spermatids and in preserving the integrity of the chromatoid body. Golgi complex inhibitor, brefeldin A, revealed the great importance of Golgi complex i) in acrosomic system formation ii) TRA54 translation and in iii) granule trafficking between spermatids.