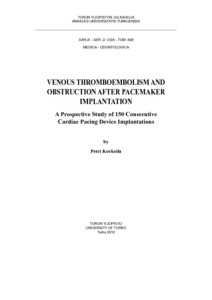 Background: Pacemaker implantation (PMI) may predispose to venous thromboembolism (VTE) and obstruction (VO). This prospective study aimed at quantifying changes in venous calibers, and at determining the incidence of symptomatic and asymptomatic VTE/VO after PMI. Further goals included an assessment of the role of transesophageal echocardiography (TEE) in the diagnosis of lead-related central venous thrombi (CVT), and determination of predictors for VTE/VO.

Methods: 150 (mean age 67; 61% male) consecutive patients with first PMI were enrolled and followed for 6 months. Contrast venography was performed at baseline and 6 months after PMI to measure venous diameters, and to detect stenosis, total occlusions and thrombi. TEE was conducted in 66 patients. Based on clinical suspicion, work-up for pulmonary embolism (PE) or acute deep vein thrombosis (DVT) were performed as needed. A total of 50 cases underwent longer-term (mean 2.4 years) follow-up venography. All cases with VTE/VO during the initial 6 months, and their matched controls, were selected for a case-control study focused on possible predictive role of laboratory and patient-related factors for the development of VTE/VO.

Results: 10 (7 %) patients were found to have baseline venous abnormalities (e.g. 8 obstructions). Mean venous diameters diminished significantly during the first 6 months, but no further reduction occurred in late follow-up. New VO was discovered in 19 patients (14 %; 14 stenosis, 5 total occlusions; all asymptomatic). Small non-obstructive thrombi were found in 20/140 (14 %) 6-month venograms. TEE at 6 months disclosed CVT in 6 (9 %) patients. One (0.7 %) patient had acute symptomatic upper-extremity DVT, and PE was discovered in 5/150 (3.3 %) patients during the first 6 months with no further cases thereafter. At 6 months, the total number of cases with VTE/VO amounted to 47 (31.3 %). Additionally, the later 2-year venograms (n=50) disclosed 4 (8 %) total occlusions and 1 (2 %) stenosis. In the case-control study, no parameter was predictive of venous end-points as a single variable, but there appeared to be significant clustering of traditional VTE risk-factors among the cases. Laboratory parameters showed a definite acute hypercoagulative state induced by PMI, but its degree did not predict subsequent development of VTE/VO.

Conclusions: This study shows that VTE/VO is relatively common after PMI with an overall incidence of at least 30 %. Although the majority of the lesions are asymptomatic and clinically benign, cases of PE were also encountered, and totally occluded veins may hamper future upgrading or replacement of pacing system. Venous complications seem difficult to prognosticate as firm predictors were not identified from a wide range of parameters analyzed in this study, although clustering of classic VTE risk factors may be a predisposing factor. Parameters related to implantation procedure or pacing systems and the severity of implantation-induced trauma did not emerge as predictors.