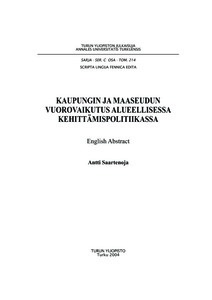 In Finland, European Union membership and economic globalisation have changed the position of regions from closed territorial systems to nodes of open international networks. The increasing complexity of cities as globalised knowledge centres and functionally specialised and diversified rural areas, and on the other hand growing disparities between prosperous urban cores and lagging peripheral areas are also essential features in contemporary regional development. These trends have produced new needs to promote mutual dialogue between cities and the countryside in western market economies. Urban-rural interaction is an idea which was developed in the late 1990s within regional policy to pull together these new challenges to regional development and handle cities and the countryside as a whole.

The aim of my study is to conceptualise the idea of urban-rural interaction, explain the phenomenon theoretically, clarify past and present urban and rural development and analyse regional policies from the interaction angle. The ultimate purpose is to illustrate the existence and nature of particular interaction policy in a globalising society. The general method is discourse analysis, which I use in three cases: Central Finland, South-Ostrobothnia and South-West Finland. Theoretically I have a two-dimensional approach. On the first hand I use World-System theory to explain how the global economy is moulding urban and rural structures at the regional level. On the other hand I use regime theory to explain local political actions and practises between cities and the countryside under the overlapping pressures deriving from reformulated regional structures and policies.

Adaptation to globalisation in Finland has been carried out by strengthening urban centres. The stress in regional policy has been in urban development. The development of the countryside has mostly been implemented by a separate rural policy. At the end of the 1990s and early 2000s Finnish cities have actually shown themselves to be competitive in global markets. The drawbacks of the new growth centre policy have been the sparse network of prosperous cities and their weak spreading effects, which have hindered comprehensive regional development. Tensions between urban and rural areas have also deepened. In this situation the interaction policy is used as a way of balancing development and moderate conflicts within the regions. From this point of view urban-rural interaction can be seen as a way of tackling the challenges of globalisation.


On the other hand the results emphasise that actors involved in regional development still believe, although the hegemonic discourse is on urban policy, that there are opportunities to stimulate progress in the countryside as well. In the situation where regional authorities control development resources, rural development can be successful only if rural actors manage to establish fruitful relationships with their urban partners. This is also the weakness of the programme-based regional policy. If rural municipalities or other actors are for any reason incapable of building development regimes with cities, the offers of interaction policy will be useless.