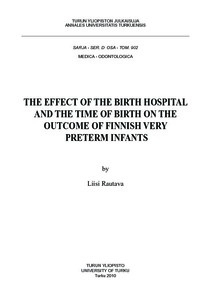 The purpose of this study was to evaluate the effect of the birth hospital and the time of birth on mortality and the long-term outcome of Finnish very low birth weight (VLBW) or very low gestational age (VLGA) infants.
This study included all Finnish VLBW/VLGA infants born at <32 gestational weeks or with a birth weight of ≤1500g, and controls born full-term and healthy. In the first part of the study, the mortality of VLBW/VLGA infants born in 2000–2003 was studied. The second part of the study consisted of a five-year follow-up of VLBW/VLGA infants born in 2001–2002. The study was performed using data from parental questionnaires and several registers.

Among five-year-old VLBW/VLGA children, morbidity, use of health care resources, and problems in behaviour and development were more common in comparison with the controls. The health-related quality of life of the surviving VLBW/VLGA children was good but, statistically, it was significantly lower than among the controls. The median and the mean number of quality-adjusted life-years were 4.6 and 3.6 out of a maximum five years for all VLBW/VLGA children. For the controls, the median was 4.8 and the mean was 4.9. Morbidity rates, the use of health care resources, and the mean quality-adjusted life-years differed for VLBW/VLGA children according to the university hospital district of birth. However, the time of birth, the birth hospital level or university hospital district were not associated with the health-related quality of life, nor with behavioural and developmental scores of the survivors at the age of five years.

In conclusion, the decreased mortality in level III hospitals was not gained at the expense of long-term problems. The results indicate that VLBW/VLGA deliveries should be centralized to level III hospitals and the regional differences in the treatment practices should further be clarified. A long-term follow-up on the outcome of VLBW/VLGA infants is important in order to recognize the critical periods of care and to optimise the care. In the future, quality-adjusted life-years can be used as a uniform measure for comparing the effectiveness of care between VLBW/VLGA infants and different patient groups