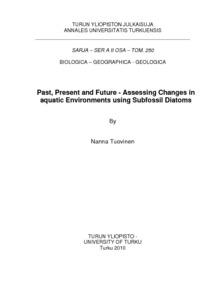 The deterioration of surface waters is one of the most important issues in the environmental management of the European Union. Thus, the EU Water Framework Directive 2000/60/EC (WFD) requires “good ecological and chemical status” of surface waters by 2015 allowing only a slight departure from ecological reference conditions characterized by the biological communities typical for the conditions of minimal anthropogenic impact. The WFD requires the determination of ecological reference conditions and the present ecological status of surface waters. To meet this legislative demand, sedimentary diatom assemblages were used in these studies with various methods 1) to assess natural and human activity induced environmental changes, 2) to characterize background conditions 3) to evaluate the present ecological status and 4) to predict the future of the water bodies in the light of palaeolimnological data. As the WFD refers to all surface waters, both coastal and inland sites were included.

Two long and two short sediment cores from the Archipelago Sea in the northern Baltic Sea were examined for their siliceous microfossils in order to assess (1) the Holocene palaeoenvironmental history and (2) the recent eutrophication of the area. The diatom record was divided into local diatom assemblage zones (LDAZ, long cores) and diatom assemblage zones (DAZ, short cores). Locally weighted weighted averaging regression and calibration (LWWA) was applied for the quantitative reconstruction of past TN concentrations (short cores). An age model for the long cores was constructed by using independent palaeomagnetic and AMS-14C methods. The short cores were dated using radiometric (210Pb, 226Ra and 137Cs) methods.

The long cores date back to the early history of the Archipelago Sea, which was freshwater – no salinity increase referable to the brackish phase of the Yoldia Sea is recognized. The nutrient status of the lacustrine phase was slightly higher in the Archipelago Sea than in the Baltic Proper. Initial brackish-water influence is observed at 8 150 ±80 cal. BP (LDAZ4), but fully brackish conditions were established at 7 700 ±80 cal. BP (LDAZ5). The diatom assemblages indicate increasing salinity, warming climate and possible eutrophic conditions during the lacustrine to brackish-water transition. The decreasing abundance of Pseudosolenia calcar-avis (Schultze) Sundström and the increasing abundance of the ice-cover indicator species Pauliella taeniata (Grunow) Round and Basson indicate decreasing salinity and climatic cooling after ca. 5 000 cal. BP.

Signs of eutrophication are visible in the most recent diatom assemblage zones of both short cores. Diatom-inferred total nitrogen (DI-TN) reconstructions partially fail to trace the actual measured total nitrogen concentrations especially from the late 1980s to the mid 1990s. This is most likely due to the dominating diatom species Pauliella taeniata, Thalassiosira levanderi Van Goor and Fragilariopsis cylindrus (Grunow) W. Krieger being more influenced by factors such as the length of the ice-season rather than nutrient concentrations. It is concluded that the diatom assemblages of the study sites are principally governed by climate fluctuations, with a slight influence of eutrophication visible in the most recent sediments. There are indications that global warming, with reduced ice cover, could impact the spring blooming diatom species composition in the Archipelago Sea. In addition, increased sediment accumulation in the early 90s coincides with the short ice-seasons suggesting that warming climate with decreasing ice-cover may increase sedimentation in the study area.

The diverse diatom assemblages dominated by benthic species (54 %) in DAZ1 in the Käldö Fjärd core can be taken as background diatom assemblages for the Archipelago Sea. Since then turbidity has increased and the diatom assemblages have been dominated by planktonic diatoms from around the mid 1800s onwards. The reconstructed reference conditions for the total nitrogen concentrations fluctuate around 400 μg l-1.
Altogether two short sediment cores and eight short cores for top-bottom analysis were retrieved from Lake Orijärvi and Lake Määrjärvi to assess the impact of the acid mine drainage (AMD) derived metals from the Orijärvi mine tailings on the diatom communities of the lakes. The Cu (Pb, Zn) mine of Orijärvi (1757 – 1956) was the first one in Finland where flotation techniques (1911 – 1955) were used to enrich ore and large quantities of tailings were produced. The AMD derived metal impact to the lakes was found to be among the heaviest thus far recorded in Finland. Concentrations of Cu, Pb and Zn in Lake Orijärvi sediments are two to three orders of magnitude higher than background values. The metal inputs have affected Lake Orijärvi and Lake Määrjärvi diatom communities at the community levels through shifts in dominant taxa (both lakes) and at the individual level through alteration in frustule morphology (Lake Orijärvi). At present, lake water still has elevated heavy metal levels, indicating that the impact from the tailings area continues to affect both lakes. Lake Orijärvi diatom assemblages are completely dominated by benthic species and are lacking planktonic diatoms. In Lake Määrjärvi the proportion of benthic and tychoplanktonic diatoms has increased and the planktonic taxa have decreased in abundance. Achnanthidium minutissimum Kützing and Brachysira vitrea (Grun.) R. Ross in Hartley were the most tolerant species to increased metal concentrations. Planktonic diatoms are more sensitive to metal contamination than benthic taxa, especially species in the genus Cyclotella (Kützing) Brébisson.

The ecological reference conditions assessed in this study for Lake Orijärvi and Lake Määrjärvi comprise diverse planktonic and benthic communitites typical of circumneutral oligotrophic lakes, where the planktonic diatoms belonging to genera Cyclotella , Aulacoseira Thwaites, Tabellaria Ehrenberg and Asterionella Hassall dominate in relative abundances up to ca. 70%. The benthic communities are more diverse than the planktonic consisting of diatoms belonging to the genera Achnanthes Bory, Fragilaria Lyngbye and Navicula St. Vincent.

This study clearly demonstrates that palaeolimnological methods, especially diatom analysis, provide a powerful tool for the EU Water Frame Work Directive for defining reference conditions, natural variability and current status of surface waters. The top/bottom approach is a very useful tool in larger-scale studies needed for management purposes. This “before and after” type of sediment sampling method can provide a very time and cost effective assessment of ecological reference conditions of surface waters.