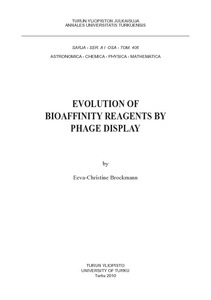 Antibodies are natural binding proteins produced in vertebrates as a response to invading pathogens and foreign substances. Because of their capability for tight and specific binding, antibodies have found use as binding reagents in research and diagnostics. Properties of cloned recombinant antibodies can be further improved by means of in vitro evolution, combining mutagenesis with subsequent phage display selection. It is also possible to isolate entirely new antibodies from vast naïve or synthetic antibody libraries by phage display.

In this study, library techniques and phage display selection were applied in order to optimise binding scaffolds and antigen recognition of antibodies, and to evolve new and improved bioaffinity reagents. Antibody libraries were generated by random and targeted mutagenesis. Expression and stability were mainly optimised by the random methods whereas targeted randomisation of the binding site residues was used for optimising the binding properties. Trinucleotide mutagenesis allowed design of defined randomisation patterns for a synthetic antibody library. Improved clones were selected by phage display. Capture by a specific anti- DHPS antibody was exploited in the selection of improved phage display of DHPS. Efficient selection for stability was established by combining phage display selection with denaturation under reducing conditions. Broad-specific binding of a generic anti-sulfonamide antibody was improved by selection with one of the weakest binding sulfonamides. In addition, p9 based phage display was studied in affinity selection from the synthetic library.

A TIM barrel protein DHPS was engineered for efficient phage display by combining cysteinereplacement with random mutagenesis. The resulting clone allows use of phage display in further engineering of DHPS and possibly use as an alternative-binding scaffold. An anti-TSH scFv fragment, cloned from a monoclonal antibody, was engineered for improved stability to better suite an immunoassay. The improved scFv tolerates 8 – 9 °C higher temperature than the parental scFv and should have sufficient stability to be used in an immunoanalyser with incubation at 36 °C. The anti-TSH scFv fragment was compared with the corresponding Fab fragment and the parental monoclonal antibody as a capturing reagent in a rapid 5-min immunoassay for TSH. The scFv fragment provided some benefits over the conventionally used Mab in anayte-binding capacity and assay kinetics. However, the recombinant Fab fragment, which had similar kinetics to the scFv, provided a more sensitive and reliable assay than the scFv. Another cloned scFv fragment was engineered in order to improve broad-specific recognition of sulfonamides. The improved antibody detects different sulfonamides at concentrations below the maximum residue limit (100 μg/kg in EU and USA) and allows simultaneous screening of different sulfonamide drug residues. Finally, a synthetic antibody library was constructed and new antibodies were generated and affinity matured entirely in vitro. These results illuminate the possibilities of phage display and antibody engineering for generation and optimisation of binding reagents in vitro and indicate the potential of recombinant antibodies as affinity reagents in immunoassays.