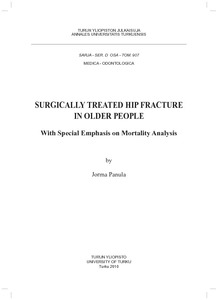 Hip fractures are associated with significant morbidity and mortality. Cervical and trochanteric fractures have a different morphometry, surgical treatment, and outcome. Polypharmacy, common in older people, is associated with increased mortality. The risk factors for mortality can be identified based on cause-of-death analysis.

Hip fractures were most commonly sustained by women, occurred mostly indoors, and often in institutions. One in four patients had sustained a previous fracture. Routine clinical radiographs revealed no differences in the hip geometry between hip fracture types. Age-adjusted mortality was higher in men than in women during the follow-up. Chronic lung disease and male sex were predictors of mortality after cervical fracture. In men, potent anticholinergics were associated with excess age-adjusted mortality. Men were more likely to die from circulatory disease and dementia after hip fracture than women. Mortality after hip fracture was 3-fold higher than that of the general population, including every cause-of-death class.

Fracture prevention in institutions and homes, indoor safety measures, and treatment of chronic lung diseases should be encouraged. Hip morphometry analyses require more accurate measures than that provided by routine radiographs. Careful use of potent anticholinergics may reduce mortality. Compared to the general population, excess mortality after hip fracture was evident up to 9 years after hip fracture. Cause-of-death analysis indicates that all major comorbidities require optimal treatment after hip fracture surgery.