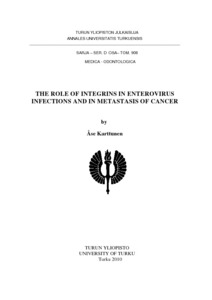 Integrins are a family of transmembrane glycoproteins, composed of two different subunits (alpha and beta). Altered expression of integrins in tumor cells contributes to metastasis tendency by influencing on the cells‟ attachment to adjacent cells and their migration. Viral pathogens, including certain enteroviruses, use integrins as receptors. Enteroviruses have also been suggested to be involved in the etiopathogenesis of type 1 diabetes.

The study focuses on the role of integrins in the pathogenesis of metastasis to cortical bone and on type 1 diabetes (T1D) and echovirus 1 infection. In the first part of the thesis, the role of different integrins in the initial attachment of MDA-MD-231 breast cancer cells to bovine cortical bone disks was studied. A close correlation between alpha2beta1 and alpha3beta1 integrin receptor expression and the capability of the tumor to attach to bone were observed. In the second part, a possible correlation between susceptibility to enterovirus infections in diabetic children and differences in enterovirus receptor genes, including certain integrins, was investigated. In parallel, virus-specific neutralizing antibodies and diabetic risk alleles were studied. In the diabetic group, an amino acid change was detected in the polio virus receptor and the neutralizing antibody titers against echovirus 30 were lower. However, to obtain statistically sustainable results, a larger number of individuals should be analyzed. Echovirus 1 (EV1) enters cells by attaching to the alpha2I domain of the alpha2beta1 integrin. In the third part EV1 was shown to attach to a chimeric receptor construct of the transferrin receptor and the alpha2I domain and to enter cells through clathrin-mediated endocytosis that is normally not used by the virus. The chimeric receptor was recycled to the plasma membrane, whereas the virus remained in intracellular vesicles. The virus replication cycle was initiated in these cells, suggesting that evolution pressure could possibly cause the virus to evolve to use a different entry mechanism. Moreover, a cDNA microarray analysis of host gene expression during EV1 replication showed that 0.53% of the total genes, including several immediate early genes, were differently expressed.
Siirretty Doriasta