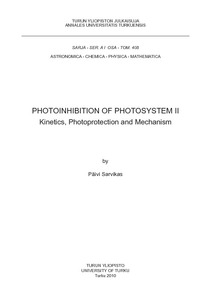 Photosystem II (PSII) is susceptible to light-induced damage defined as photoinhibition. In natural conditions, plants are capable of repairing the photoinhibited PSII by on-going degradation and re-synthesis of the D1 reaction centre protein of PSII. Photoinhibition is induced by both visible and ultraviolet light and photoinhibition occurs under all light intensities with the same efficiency per photon. In my thesis work, I studied the reaction kinetics and mechanism of photoinhibition of PSII, as well as photoprotection in leaves of higher plants.