Small and Large Scale Dynamics in the Milky Way 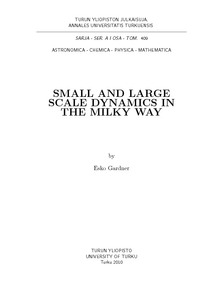 
The thesis looks at the orbit of the Sun, and its impact on the Oort cloud comets (Paper IV), showing that there is a clear link between these two dynamical systems. The statistical atypicalness of the orbit of the Sun is questioned (Paper I), concluding that there is some statistical typicalness to the orbit of the Sun, although it is not very significant. This does depend slightly on whether one includes a bar, or not, as a bar has a clear effect on the dynamical features seen in the Solar neighbourhood (Paper III). This method can be used to find the possible properties of a bar. Finally, we look at the effect of a bar on a statistical system in the Milky Way, seeing that there are not only interesting effects depending on the mass and size of the bar, but also how bars can capture disc stars (Paper II).