Utilization of Incident Reporting in The Finnish Maritime Industry 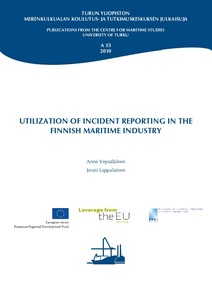 Marine traffic is expected to increase rapidly in the future, both in the Baltic Sea and in the Gulf of Finland. As the number of vessels in the area increases, so does the risk of serious marine accidents. To help prevent such accidents in the future, the International Maritime Organization (IMO) has put forth the International Safety Management Code (the ISM Code), which aims to improve the safety of the vessels. The second work package of the Development of maritime safety culture (METKU) project investigates the effects of the ISM Code and potential areas of improvement in maritime safety.

The first phase in the work package used a literature review to determine how maritime safety culture could be improved. Continuous improvement, management commitment and personnel empowerment and motivation were found to be essential. In the second phase, shipping companies and administrators were interviewed. It was discovered that especially incident reporting based on continuous improvement was felt to be lacking. This third phase aims to take a closer look at incident reporting and suggest improvements based on the findings.

According to the findings of this research, the theoretical background of incident reporting dates back to the early 20th century. Although some theories are widely accepted, some have also received criticism. The lack of a concise, shared terminology poses major difficulties in maritime incident reporting and in determining its efficiency. A central finding is the fact that existing incident reporting focuses mostly on information flow away from the ship, whereas the backward information flow is much less planned and monitored.

In incident reporting, both nationally and internationally, stakeholders are plenty. The information produced by these parties is scattered, however, and thus not very usable. Based on this research, the centralizing of this information should be made a priority. Traditionally, the success of incident reporting has been determined statistically, from the number of reported incidents. Yet existing reporting systems have not been designed with such statistical analysis in mind, so different methodologies might yield a more comprehensive view. The previous findings of seafarers and management (including shipping companies and administration) having differing views on safety work and safety management were backed up by the results of this study. Seafarers find seamanship and storytelling important, while management wants a more systematic and broad approach on safety matters.

The research project was carried out by the Centre for Maritime Studies of the University of Turku, in the Kotka unit (Maritime Logistics Research), with coordination by the Kotka Maritime Research Centre. The major financiers of the project were the European Union and the city of Kotka. The financing authority was the Regional Council of Päijät-Häme. Partners in the project were the shipping companies Finnlines Oyj, Kristina Cruises Oy, Meriaura Oy and VG-Shipping Oy, and the ports of Helsinki, Kotka and Hamina. The partners provided both funding for the project and information for the research.