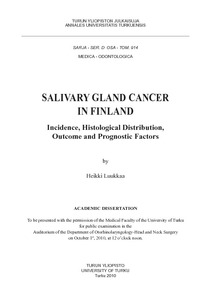 Salivary gland cancer (SGC) is a rare cancer. The histological classification of SGC is complex and its biological behavior highly variable: it may vary from a low-grade tumor to a high-grade and often fatal malignancy. These circumstances make this cancer a diagnostic and therapeutic challenge. Older age and exposure to ionizing radiation are known risk factors. The mainstay of treatment is surgery combined with adjuvant radiation therapy, when appropriate. In addition to the histological type, the only well known prognostic factor is the TNM classification, which describes the tumor size and the amount of metastases.
This study was performed using a full population-based nationwide cohort of SGC patients and tumors diagnosed in Finland in 1991-1996. The annual incidence of SGC in the entire population was, on average, 47.7 per year. By histological re-evaluation of 237 specimens the most frequent histological types were the adenoid cystic carcinoma (n=65; 27%), the mucoepidermoid carcinoma (n=45; 19%) and the acinic cell carcinoma (n=41; 17%). The highest 10-year disease-specific survival rate occurred among patients with acinic cell carcinoma (90%), followed by mucoepidermoid carcinoma (81%) and adenoid cystic carcinoma (60%).