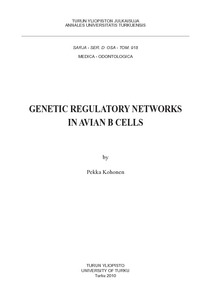 Biology is turning into an information science. The science of systems biology seeks to understand the genetic networks that govern organism development and functions. In this study the chicken was used as a model organism in the study of B cell regulatory factors. These studies open new avenues for plasma cell research by connecting the down regulation of the B cell gene expression program directly to the initiation of plasma cell differentiation.

The unique advantages of the DT40 avian B cell model system, specifically its high homologous recombination rate, were utilized to study gene regulation in Pax5 knock out cell lines and to gain new insights into the B cell to plasma cell transitions that underlie the secretion of antibodies as part of the adaptive immune response. The Pax5 transcription factor is central to the commitment, development and maintenance of the B cell phenotype. Mice lacking the Pax5 gene have an arrest in development at the pro-B lymphocyte stage while DT40 cells have been derived from cells at a more mature stage of development. The DT40 Pax5-/- cells exhibited gene expression similarities with primary chicken plasma cells. The expression of the plasma cell transcription factors Blimp-1 and XBP-1 were significantly upregulated while the expression of the germinal centre factor BCL6 was diminished in Pax5-/- cells, and this alteration was normalized by Pax5 re-introduction. The Pax5-deficient cells further manifested substantially elevated secretion of IgM into the supernatant, another characteristic of plasma cells. These results for the first time indicated that the downregulation of the Pax5 gene in B cells promotes plasma cell differentiation.

Cross-species meta-analysis of chicken and mouse Pax5 gene knockout studies uncovers genes and pathways whose regulatory relationship to Pax5 has remained unchanged for over 300 million years.

Restriction of the hematopoietic stem cell fate to produce T, B and NK cell lineages is dependent on the Ikaros and its molecular partners, the closely related Helios and Aiolos. Ikaros family members are zinc finger proteins which act as transcriptional repressors while helping to activate lymphoid genes. Helios in mice is expressed from the hematopoietic stem cell level onwards, although later in development its expression seems to predominate in the T cell lineage. This study establishes the emergence and sequence of the chicken Ikaros family members. Helios expression in the bursa of Fabricius, germinal centres and B cell lines suggested a role for Helios in the avian B-cell lineage, too.

This study highlighted the opportunities afforded by the genome sequencing efforts and somatic cell reverse genetics approaches using the DT40 cell line. The DT40 cell line and the avian model system promise to remain a fruitful model for mechanistic insight in the post-genomic era as well.