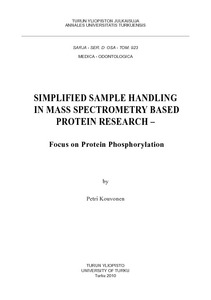 The human genome comprises roughly 20 000 protein coding genes. Proteins are the building material for cells and tissues, and proteins are functional compounds having an important role in many cellular responses, such as cell signalling.

In multicellular organisms such as humans, cells need to communicate with each other in order to maintain a normal function of the tissues within the body. This complex signalling between and within cells is transferred by proteins and their post-translational modifications, one of the most important being phosphorylation. The work presented here concerns the development and use of tools for phosphorylation analysis.

Mass spectrometers have become essential tools to study proteins and proteomes. In mass spectrometry oriented proteomics, proteins can be identified and their post-translational modifications can be studied. In this Ph.D. thesis the objectives were to improve the robustness of sample handling methods prior to mass spectrometry analysis for peptides and their phosphorylation status. The focus was to develop strategies that enable acquisition of more MS measurements per sample, higher quality MS spectra and simplified and rapid enrichment procedures for phosphopeptides. Furthermore, an objective was to apply these methods to characterize phosphorylation sites of phosphopeptides.

In these studies a new MALDI matrix was developed which allowed more homogenous, intense and durable signals to be acquired when compared to traditional CHCA matrix. This new matrix along with other matrices was subsequently used to develop a new method that combines multiple spectra from different matrises from identical peptides. With this approach it was possible to identify more phosphopeptides than with conventional LC/ESI-MS/MS methods, and to use 5 times less sample. Also, phosphopeptide affinity MALDI target was prepared to capture and immobilise phosphopeptides from a standard peptide mixture while maintaining their spatial orientation. In addition a new protocol utilizing commercially available conductive glass slides was developed that enabled fast and sensitive phosphopeptide purification. This protocol was applied to characterize the in vivo phosphorylation of a signalling protein, NFATc1. Evidence for 12 phosphorylation sites were found, and many of those were found in multiply phosphorylated peptides