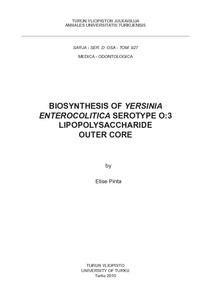 Lipopolysacharide (LPS) present on the outer leaflet of Gram-negative bacteria is important for the adaptation of the bacteria to the environment. Structurally, LPS can be divided into three parts: lipid A, core and O-polysaccharide (OPS). OPS is the outermost and also the most diverse moiety. When OPS is composed of identical sugar residues it is called homopolymeric and when it is composed of repeating units of oligosaccharides it is called heteropolymeric.
Bacteria synthesize LPS at the inner membrane via two separate pathways, Lipid A-core via one and OPS via the other. These are ligated together in the periplasmic space and the completed LPS molecule is translocated to the surface of the bacteria. The genes directing the OPS biosynthesis are often clustered and the clusters directing the biosynthesis of heteropolymeric OPS often contain genes for i) the biosynthesis of required NDP-sugar precursors, ii) glycosyltransferases needed to build up the repeating unit, iii) translocation of the completed O-unit to the periplasmic side of the inner membrane (flippase) and iv) polymerization of the repeating units to complete OPS.

The aim of this thesis was to characterize the biosynthesis of the outer core (OC) of Yersinia enterocolitica serotype O:3 (YeO3). Y. enterocolitica is a member of the Gram-negative Yersinia genus and it causes diarrhea followed sometimes by reactive arthritis. The chemical structure of the OC and the nucleotide sequence of the gene cluster directing its biosynthesis were already known; however, no experimental evidence had been provided for the predicted functions of the gene products. The hypothesis was that the OC biosynthesis would follow the pathway described for heteropolymeric OPS, i.e. a Wzy-dependent pathway.

In this work, the linkage specificities and the order in which the different glycosyltransferases build up the OC onto the lipid carrier were also investigated. In addition, by using a site-directed mutagenesis approach the catalytically important amino acids of Gne and two of the characterized glycosyltranferases were identified. Also evidence to show the enzymes involved in the ligations of OC and OPS to the lipid A inner core was provided.

The importance of the OC to the physiology of Y. enterocolitica O:3 was defined by determining the minimum requirements for the OC to be recognized by a bacteriophage, bacteriocin and monoclonal antibody. The biological importance of the rare keto sugar (Sugp) was also shown.

As a conclusion this work provides an extensive overview of the biosynthesis of YeO3 OC as it provides a substantial amount of information of the stepwise and coordinated synthesis of the Ye O:3 OC hexasaccharide and detailed information of its properties as a receptor.