Studies on the Multifaceted Interaction of Atoms and an Electromagnetic Field 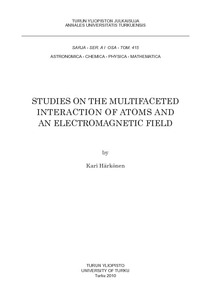 In this Thesis the interaction of an electromagnetic field and matter is studied from various aspects in the general framework of cold atoms. Our subjects cover a wide spectrum of phenomena ranging from semiclassical few-level models to fully quantum mechanical interaction with structured reservoirs leading to non-Markovian open quantum system dynamics.

Within closed quantum systems, we propose a selective method to manipulate the motional state of atoms in a time-dependent double-well potential and interpret the method in terms of adiabatic processes. Also, we derive a simple wave-packet model, based on distributions of generalized eigenstates, explaining the finite visibility of interference in overlapping continuous-wave atom lasers.

In the context of open quantum systems, we develop an unraveling of non-Markovian dynamics in terms of piecewise deterministic quantum jump processes confined in the Hilbert space of the reduced system - the non-Markovian quantum jump method. As examples, we apply it for simple 2- and 3-level systems interacting with a structured reservoir. Also, in the context of ion-cavity QED we study the entanglement generation based on collective Dicke modes in experimentally realistic conditions including photonic losses and an atomic spontaneous decay.