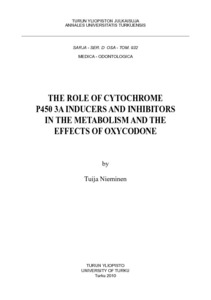 Oxycodone is an opioid used in the treatment of moderate or severe pain. It is principally metabolized in the liver by cytochrome P450 3A (CYP3A) enzymes whereas approximately 10% is metabolized by CYP2D6. Little is known about the interactions between oxycodone and other drugs, herbals and nutritional substances. In this work the effects of CYP3A inducers rifampicin and St. John’s wort and CYP3A inhibitors voriconazole, grapefruit juice, ritonavir and lopinavir/ritonavir were investigated on the pharmacokinetics and pharmacodynamics of oxycodone.

All studies were randomized, balanced, placebo-controlled crossover clinical studies in healthy volunteers. The plasma concentrations of oxycodone and its metabolites were determined for 48 hours and pharmacodynamic parameters were recorded for 12 hours in each study. Pharmacokinetic parameters were calculated by noncompartmental methods.

These studies show that the induction or inhibition of CYP3A alters the pharmacokinetics and pharmacologic effects of oxycodone. The exposure to oxycodone decreased after induction and increased after inhibition of CYP3A. As a conclusion, the clinicians should avoid concomitant administration of CYP3A inducers or inhibitors and oral oxycodone. If this is not possible, they should be prepared to interactions leading to impaired analgesia after CYP3A inducers or increased adverse effects after CYP3A inhibitors and oral oxycodone.