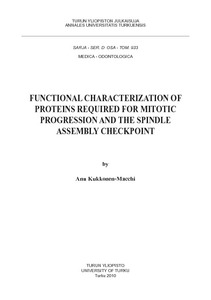 During mitotic cell division, the genetic material packed into chromosomes is divided equally between two daughter cells. Before the separation of the two copies of a chromosome (sister chromatids), each chromosome has to be properly connected with microtubules of the mitotic spindle apparatus and aligned to the centre of the cell. The spindle assembly checkpoint (SAC) monitors connections between microtubules and chromosomes as well as tension applied across the centromere. Microtubules connect to a chromosome via kinetochores, which are proteinaceous organelles assembled onto the centromeric region of the sister chromatids. Improper kinetochore-microtubule attachments activate the SAC and block chromosome segregation until errors are corrected and all chromosomes are connected to the mitotic spindle in a bipolar manner. The purpose of this surveillance mechanism is to prevent loss or gain of chromosomes in daughter cells that according to current understanding contributes to cancer formation. Numerous proteins participate in the regulation of mitotic progression. In this thesis, the mitotic tasks of three kinetochore proteins, Shugoshin 1 (Sgo1), INCENP, and p38 MAP kinase (p38 MAPK), were investigated. Sgo1 is a protector of centromeric cohesion. It is also described in the tension-sensing mechanism of the SAC and in the regulation of kinetochore-microtubule connections. Our results revealed a central role for Sgo1 in a novel branch of kinetochore assembly. INCENP constitutes part of the chromosomal passenger complex (CPC). The other members of the core complex are the Aurora B kinase, Survivin and Borealin. CPC is an important regulatory element of cell division having several roles at various stages of mitosis. Our results indicated that INCENP and Aurora B are highly dynamic proteins at the mitotic centromeres and suggested a new role for CPC in regulation of chromosome movements and spindle structure during late mitosis. The p38 MAPK has been implicated in G1 and G2 checkpoints during the cell cycle. However, its role in mitotic progression and control of SAC signaling has been controversial. In this thesis, we discovered a novel function for p38γ MAPK in chromosome orientation and spindle structure as well as in promotion of viability of mitotic cells.