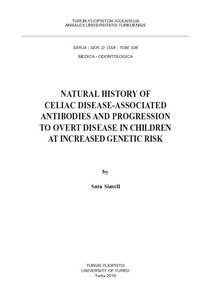 Subjects and Methods: Antibodies against tissue transglutaminase (TGA) and other celiac disease-associated antibodies were measured in serum samples collected at 3- to 12-month intervals of children at genetic risk for celiac disease who participated in the DIPP project. Celiac disease was confirmed by duodenal biopsy. Type 1 diabetes-associated antibodies were measured in all samples that had been collected. Overt disease was diagnosed according to World Health Organization criteria. Follow-up continued until a diagnosis of type 1 diabetes or until the end of a defined follow-up period.