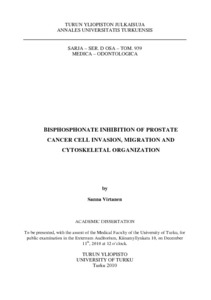 Metastatic bone lesions are commonly associated with prostate cancer affecting approximately 60-80% of the patients. The progression of prostate cancer into an advanced stage is a complex process and its molecular mechanisms are poorly understood. So far, no curative treatment is available for advanced stages of prostate cancer. Bisphosphonates (BPs) are synthetic pyrophosphate analogues, which are used as therapeutics for various metabolic bone diseases because of their ability to inhibit osteoclastic bone resorption. Nitrogen-containing bisphosphonates block the function of osteoclasts by disturbing the vesicular traffic and the mevalonate pathway -related enzymes, for example farnesyl diphosphate synthase, which is involved in post-translational isoprenylation of small GTPases. In addition, the anti-proliferative, anti-invasive and pro-apoptotic effects of nitrogen-containing bisphosphonates on various cancer cell lines have been reported.

The aim of this thesis work was to clarify the effects of bisphosphonates on prostate cancer cells, focusing on the mechanisms of adhesion, invasion and migration. Furthermore, the role of the mevalonate pathway and prenylation reactions in invasion and regulation of the cytoskeleton of prostate cancer cells were examined. Finally, the effects of alendronate on cytoskeleton- and actin-related proteins in prostate cancer cells were studied in vitro and in vivo. The results showed that the nitrogen-containing bisphosphonate alendronate inhibited the adhesion of prostate cancer cells to various extracellular matrix proteins and migration and invasion in vitro. Inhibition of invasion and migration was reversed by mevalonate pathway intermediates. The blockage of the prenylation transferases GGTase I and FTase inhibited the invasion, migration and actin organization of prostate cancer cells. The marked decrease of cofilin was observed by the prenylation inhibitors used. Inhibition of GGTase I also disrupted the regulation of focal adhesion kinase and paxillin. In addition, alendronate disrupted the cytoskeletal organization and decreased the level of cofilin in vitro and in vivo. The decrease of the cofilin level by alendronate could be one of the key mechanisms behind the observed inhibition of migration and invasion. Based on the effects of nitrogen-containing bisphosphonates on tumor cell invasion and cytoskeletal organization, they can be suggested to be developed as therapeutics for inhibiting prostate cancer metastasis.