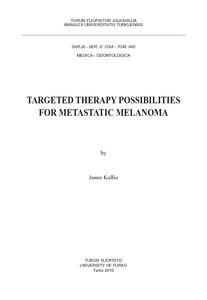 The incidence of malignant melanoma of the skin has been steadily rising worldwide during the past decades. Most early detected primary tumors can be removed surgically and the prognosis is good. However, at the same time there still is no permanent cure for metastatic melanoma and its prognosis is poor, although lately new effective drugs have emerged.

In this thesis, four different approaches of experimental therapy for metastatic melanoma were studied. Endogenous cis-Urocanic acid (UCA) is found in every individual’s skin, where exposure to UV light from the sun generates it from its inactive trans conformation. Cis- UCA was found to destroy malignant melanoma cells in culture under an acidified pH and sufficient concentration through caspase-3 mediated apoptosis. Furthermore, cis-UCA is able to considerably diminish the growth rate in human melanoma tumors on living SCID mice.

Using replication-competent Semliki Forest viruses, human melanoma tumors grown in SCID mice were dramatically shrunken as the fulminant production of viruses in melanoma cells leads them to apoptosis within 72 hours. Small oligopeptides attaching to melanoma cells were identified using in vivo phage display. The melanoma-specific peptides found were further tested in vitro on adenoviruses. Ultimately, the adenoviral retargeting using the peptides was tested in vivo. One peptide homed to human transferring receptor upregulated on melanoma cells.

In order to kill the malignant melanoma cells with the retargeted adenoviruses, the viruses should carry genetic material producing apoptotic proteins in the cancer tissue. TIMP-3 has been identified as a good candidate for such a protein, as it inhibits malignant cell adhesion as well as promotes apoptosis through a caspase-8 pathway. It is further shown here that adenovirally delivered TIMP-3 is even more potent, as it could kill non-adherent cancer cells, lacking the fully functional death receptor signalling pathway. Adenovirally delivered TIMP-2 also showed marked antitumor effects in human malignant melanoma xenografts on SCID mice both in ex vivo and systemic delivery.