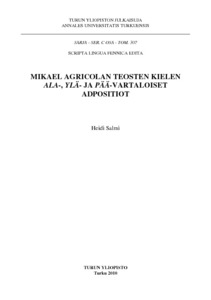 Adpositions with the stems ala, ylä and pää in the language of Mikael Agricola’s writings

The language of Mikael Agricola’s (c 1510–1557) writings represents an interesting phase in the development of the Finnish system for adpositions. In the Finnish language, the older Uralic system of postpositions has undergone expansion and a new system of prepositions has been adopted. On the other hand, the adposition system found in Agricola’s writings has also been strongly affected by foreign models, because Agricola’s texts are mainly translations of religious texts, which by and large use a word-for-word translation strategy.

Adpositions with stems ala, ylä and pää form an interesting subject for research. Their frequency in the data, however, is highly uneven. The overwhelming majority of the adpositions studied in the thesis are päälle; there are only two occurrences of adpositions with the stem ylä. Adpositions typically denote a location ‘under’ or ‘above’ something. Almost half of the adpositions, however, can be classified as semantically unmotivated and as representing a foreign model in terms of the Finnish language; they do not occur in present-day Finnish. In Agricola’s texts they act in more grammatical roles than the corresponding adpositions of present-day Finnish. In the thesis, the corresponding adpositions in the source languages are carefully analysed. All other uses of the adpositions are marginal in relation to spatial ones and those based on foreign models. The original meanings of the adpositions have not changed much since Agricola, but adpositions considered to originate from foreign models have been intentionally eliminated in presentday standard Finnish.