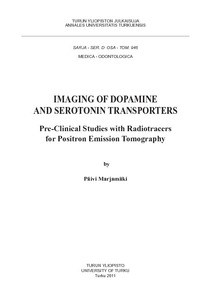 The action of the neurotransmitters dopamine (DA) and serotonin (5-HT) at synapses is terminated by their rapid reuptake into presynaptic nerve endings via plasma membrane dopamine (DAT) and serotonin (SERT) transporters. Alterations in the function of these transporters have been suggested as a feature of several neurological and neuropsychiatric diseases, such as Parkinson’s disease (PD), depression, and anxiety. A suitable clinical method for studying these transporters non-invasively in vivo is positron emission tomography (PET) utilizing radiopharmaceuticals (tracers) labelled with short-lived positron-emitting radionuclides.

The aim of this study was to evaluate in rats two novel radiotracers, [18F]beta -CFT-FP and 18FFMe-McN, for imaging DAT and SERT, respectively, using in vitro, ex vivo and in vivo methods. Substituting an N-methyl in [18F]beta-CFT, a well known DAT tracer, with a 18Ffluoropropyl group significantly changed the properties of the tracer. [18F]beta- CFT showed slow kinetics and metabolism, and a high specific uptake in the striatum, whereas [18F]beta-CFT-FP showed fast kinetics and metabolism, and a moderate specific uptake in the striatum. [18F]betaCFT-FP was selective for DAT; but [18F]beta-CFT also bound to the noradrenaline transporter. [18F]beta-CFT-FP may be a suitable PET tracer for imaging the striatal DAT sites, but a tracer with a higher affinity is needed for imaging extrastriatal DAT sites.

In rats, 18FFMe-McN showed high target-to-non-target ratios, specificity and selectivity for SERT, but slow kinetics. However, 18FFMe-McN reveals potential for imaging SERT, at least in pre-clinical studies. In addition, the sensitivities of [18F]beta CFT and [18 F]FDOPA (a precursor of DA) for detecting mild nigrostriatal hypofunction were compared in an animal model of PD. The uptake of [18F]FDOPA was significantly affected by compensatory effects in dopaminergic cells, whereas [18F]beta-CFT was more sensitive and therefore more suitable for PET studies of mild dopaminergic symptoms.

In conclusion, both novel tracers, [18F]-CFT-FP and 18FFMe-McN, have potential, but are not optimal PET tracers for DAT and SERT imaging in rats, respectively. [18F]beta-CFT is superior to [18F]FDOPA for imaging mild nigral lesions in rat brains.