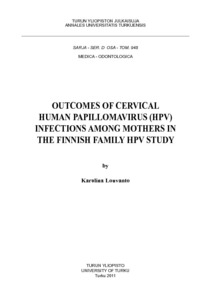 To understand the natural history of cervical human papillomavirus (HPV)-infections, more information is needed on their genotype-specific prevalence, acquisition, clearance, persistence and progression.

This thesis is part of the prospective Finnish Family HPV study. 329 pregnant women (mean age 25.5 years) were recruited during the third trimester of pregnancy and were followed up for 6 years. The outcomes of cervical HPV infections were evaluated among all the mothers participating in the study. Generalized estimating equation (GEE)-models and Poisson regression were used to estimate the risk factors of type-specific acquisition, clearance, persistence and progression of Species 7 and 9 HPV-genotypes.

HPV16, together with multiple-type infections were the most frequent incident genotypes, most likely to remain persistent and least likely to clear. Collectively, LR-HPV types showed shorter incidence and clearance times than HR-HPV types. In multivariate models, different predictors were associated with these main viral outcomes, and there is some tentative evidence to suggest that oral mucosa might play a role in controlling some of these outcomes.