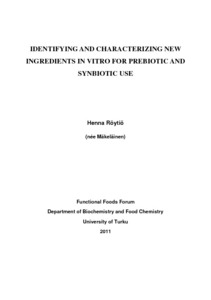 The endogenous microbiota, constituting the microbes that live inside and on humans, is estimated to outnumber human cells by a factor of ten. This commensal microbial population has an important role in many physiological functions, with the densest microbiota population found in the colon. The colonic microbiota is a highly complex and diverse bacterial ecosystem, and a delicate balance exists between the gut microbiota and its host. An imbalance in the microbial ecosystem may lead to severe symptoms in and also beyond the gastrointestinal tract.

Due to the important role of the gut microbiota in human health, means of its modification have been introduced in the dietary concepts of pro-, pre- and synbiotics. Prebiotics, which are usually carbohydrates, strive to selectively influence beneficial microbes resident in the colon with the aim of modifying the composition and functionality of the commensal microbial population towards a purportedly healthier one. The study of prebiotic effects on colonic micro-organisms is typically done by using human faecal material, though this provides relatively little information on bacterial populations and metabolic events in different parts of the colon. For this reason, several in vitro models have been developed to investigate the gut microbiota.

The aim of this doctoral thesis was to screen through some of the promising prebiotic candidates, characterize their effects on the microbiota through the use of two in vitro methods (pure microbial cultures and a colon simulator model) and to evaluate their potential as emerging prebiotics or synbiotics when combined with the probiotic Bifidobacterium lactis .

As a result of the screening work and subsequent colon simulation studies, several compounds with promising features were identified. Xylo-oligosaccharides (XOS), which have previously already shown promise as prebiotic compounds, were well fermented by several probiotic Bifidobacterium lactis strains in pure culture studies and in the following simulation studies utilizing the complex microbiota by endogenous B. lactis Another
promising compound was panose, a trisaccharide belonging to isomalto-oligosaccharides (IMO) that also was also able to modify the microbiota in vitro by increasing the number of beneficial microbes investigated. Panose has not been widely studied previously and therefore, this thesis work provided the first data on panose fermentation in mixed colonic microbiota. Galacto-oligosaccharide (GOS) is an established prebiotic, and it was studied here in conjunction with another potential polygosaccharide polydextrose (PDX) and probiotic B. lactis Bi-07. In this final study, the synbiotics including GOS were more effective than the constituting pro- or prebiotics alone in modulating the microbiota composition, thus indicating a synergy resulting from the combination. The results obtained in this in vitro work can be, and have already been, utilized in product development aimed at the nutritional modification of the human colonic microbiota. Some of the compounds have entered the human clinical intervention phase to nvestigate in more detail the prebiotic and synbiotic properties seen in these in vitro studies.