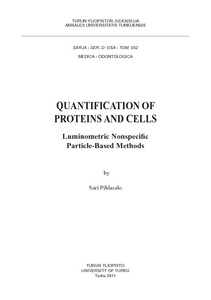 New luminometric particle-based methods were developed to quantify protein and to count cells. The developed methods rely on the interaction of the sample with nano- or microparticles and different principles of detection. In fluorescence quenching, timeresolved luminescence resonance energy transfer (TR-LRET), and two-photon excitation fluorescence (TPX) methods, the sample prevents the adsorption of labeled protein to the particles. Depending on the system, the addition of the analyte increases or decreases the luminescence. In the dissociation method, the adsorbed protein protects the Eu(III) chelate on the surface of the particles from dissociation at a low pH. The experimental setups are user-friendly and rapid and do not require hazardous test compounds and elevated temperatures. The sensitivity of the quantification of protein (from 40 to 500 pg bovine serum albumin in a sample) was 20-500-fold better than in most sensitive commercial methods. The quenching method exhibited low protein-to-protein variability and the dissociation method insensitivity to the assay contaminants commonly found in biological samples. Less than ten eukaryotic cells were detected and quantified with all the developed methods under optimized assay conditions. Furthermore, two applications, the method for detection of the aggregation of protein and the cell viability test, were developed by utilizing the TR-LRET method. The detection of the aggregation of protein was allowed at a more than 10,000 times lower concentration, 30 μg/L, compared to the known methods of UV240 absorbance and dynamic light scattering. The TR-LRET method was combined with a nucleic acid assay with cell-impermeable dye to measure the percentage of dead cells in a single tube test with cell counts below 1000 cells/tube.