Towards an Integrative Information Society: Studies on Individuality in Speech and Sign 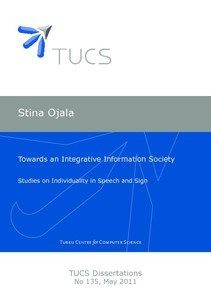 The flow of information within modern information society has increased rapidly over the last decade. The major part of this information flow relies on the individual’s abilities to handle text or speech input. For the majority of us it presents no problems, but there are some individuals who would benefit from other means of conveying information, e.g. signed information flow. During the last decades the new results from various disciplines have all suggested towards the common background and processing for sign and speech and this was one of the key issues that I wanted to investigate further in this thesis. The basis of this thesis is firmly within speech research and that is why I wanted to design analogous test batteries for widely used speech perception tests for signers – to find out whether the results for signers would be the same as in speakers’ perception tests. One of the key findings within biology – and more precisely its effects on speech and communication research – is the mirror neuron system. That finding has enabled us to form new theories about evolution of communication, and it all seems to converge on the hypothesis that all communication has a common core within humans.

In this thesis speech and sign are discussed as equal and analogical counterparts of communication and all research methods used in speech are modified for sign. Both speech and sign are thus investigated using similar test batteries. Furthermore, both production and perception of speech and sign are studied separately. An additional framework for studying production is given by gesture research using cry sounds. Results of cry sound research are then compared to results from children acquiring sign language. These results show that individuality manifests itself from very early on in human development. Articulation in adults, both in speech and sign, is studied from two perspectives: normal production and re-learning production when the apparatus has been changed. Normal production is studied both in speech and sign and the effects of changed articulation are studied with regards to speech. Both these studies are done by using carrier sentences. Furthermore, sign production is studied giving the informants possibility for spontaneous speech. The production data from the signing informants is also used as the basis for input in the sign synthesis stimuli used in sign perception test battery.

Speech and sign perception were studied using the informants’ answers to questions using forced choice in identification and discrimination tasks. These answers were then compared across language modalities. Three different informant groups participated in the sign perception tests: native signers, sign language interpreters and Finnish adults with no knowledge of any signed language. This gave a chance to investigate which of the characteristics found in the results were due to the language per se and which were due to the changes in modality itself.

As the analogous test batteries yielded similar results over different informant groups, some common threads of results could be observed. Starting from very early on in acquiring speech and sign the results were highly individual. However, the results were the same within one individual when the same test was repeated. This individuality of results represented along same patterns across different language modalities and - in some occasions - across language groups. As both modalities yield similar answers to analogous study questions, this has lead us to providing methods for basic input for sign language applications, i.e. signing avatars. This has also given us answers to questions on precision of the animation and intelligibility for the users – what are the parameters that govern intelligibility of synthesised speech or sign and how precise must the animation or synthetic speech be in order for it to be intelligible. The results also give additional support to the well-known fact that intelligibility in fact is not the same as naturalness. In some cases, as shown within the sign perception test battery design, naturalness decreases intelligibility. This also has to be taken into consideration when designing applications.

All in all, results from each of the test batteries, be they for signers or speakers, yield strikingly similar patterns, which would indicate yet further support for the common core for all human communication. Thus, we can modify and deepen the phonetic framework models for human communication based on the knowledge obtained from the results of the test batteries within this thesis.