The Significance of Hydrogen Bonding Interactions in the Cleavage of RNA

The Significance of Hydrogen Bonding Interactions in the Cleavage of RNA 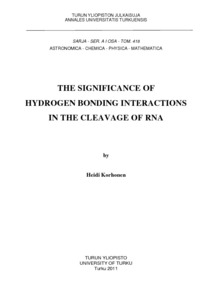 RNA is essential for all living organisms. It has important roles in protein synthesis, controlling gene expression as well as catalyzing biological reactions. Chemically RNA is a very stable molecule, although in biological systems many agents catalyze the cleavage of RNA, such as naturally occurring enzymes and ribozymes.

Much effort has been put in the last decades in developing highly active artificial ribonucleases since such molecules could have potential in the therapeutic field and provide tools for molecular biology. Several potential catalysts have emerged, but usually detailed cleavage mechanism remains unresolved. This thesis is aimed at clarifying mechanistic details of the cleavage and isomerization of RNA by using simpler nucleoside models of RNA. The topics in the experimental part cover three different studies, one concerning the mechanism of catalysis by large ribozymes, one dealing with the reactivity of modified and unmodified RNA oligonucleotides and one showing an efficient catalysis of the cleavage and isomerization of an RNA phosphodiester bond by a dinuclear metal ion complex.

A review of the literature concerning stabilization of the phosphorane intermediate of the hydrolysis and isomerization of RNA phosphodiester bond is first presented. The results obtained in the experimental work followed by mechanistic interpretations are introduced in the second part of the thesis. Especially the significance of hydrogen bonding interactions is discussed.