The Structural Basis for inorganic Pyrophosphatase Catalysis and Regulation

The Structural Basis for inorganic Pyrophosphatase Catalysis and Regulation 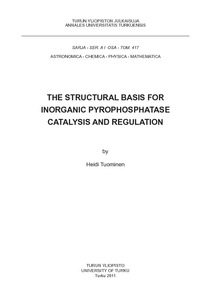 Inorganic pyrophosphatases (PPases) are essential enzymes for every living cell. PPases provide the necessary thermodynamic pull for many biosynthetic reactions by hydrolyzing pyrophosphate. There are two types of PPases: integral membrane-bound and soluble enzymes. The latter type is divided into two non-homologous protein families, I and II. Family I PPases are present in all kingdoms of life, whereas family II PPases are only found in prokaryotes, including archae.

Family I PPases, particularly that from Saccharomyces cerevisiae, are among the most extensively characterized phosphoryl transfer enzymes. In the present study, we have solved the structures of wild-type and seven active site variants of S. cerevisiae PPase bound to its natural metal cofactor, magnesium ion. These structures have facilitated derivation of the complete enzyme reaction scheme for PPase, fulfilling structures of all the reaction intermediates.

The main focus in this study was on a novel subfamily of family II PPases (CBSPPase) containing a large insert formed by two CBS domains and a DRTGG domain within the catalytic domain. The CBS domain (named after cystathionine beta-synthase in which it was initially identified) usually occurs as tandem pairs with two or four copies in many proteins in all kingdoms of life. The structure formed by a pair of CBS domains is also known as a Bateman domain. CBS domains function as regulatory units, with adenylate ligands as the main effectors. The DRTGG domain (designated based on its most conserved residues) occurs less frequently and only in prokaryotes. Often, the domain co-exists with CBS domains, but its function remains unknown.

The key objective of the current study was to explore the structural rearrangements in the CBS domains induced by regulatory adenylate ligands and their functional consequences. Two CBS-PPases were investigated, one from Clostridium perfringens (cpCBS-PPase) containing both CBS and DRTGG domains in its regulatory region and the other from Moorella thermoacetica (mt CBS-PPase) lacking the DRTGG domain. We additionally constructed a separate regulatory region of cpCBS-PPase (cpCBS). Both full-length enzymes and cpCBS formed homodimers. Two structures of the regulatory region of cpCBS-PPase complexed with the inhibitor, AMP, and activator, diadenosine tetraphosphate, were solved. The structures were significantly different, providing information on the structural pathway from bound adenylates to the interface between the regulatory and catalytic parts. To our knowledge, these are the first reported structures of a regulated CBS enzyme, which reveal large conformational changes upon regulator binding. The activator-bound structure was more open, consistent with the different thermostabilities of the activator- and inhibitor-bound forms of cpCBS-PPase.

The results of the functional studies on wild-type and variant CBS-PPases provide support for inferences made on the basis of structural analyses. Moreover, these findings indicate that CBS-PPase activity is highly sensitive to adenine nucleotide distribution between AMP, ADP and ATP, and hence to the energy level of the cell. CBS-PPase activity is markedly inhibited at low energy levels, allowing PPi energy to be used for cell survival instead of being converted into heat.