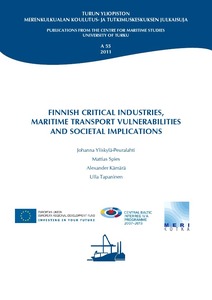 Maritime transports are very essential for Finland as over 80% of the foreign trade in the country is seaborne and possibilities to carry out these transports by are limited. Any disruption in maritime transports has negative consequences to many sectors in the Finnish economy. Maritime transport thus represents critical infrastructure for Finland. This report focuses on the importance of maritime transports on security of supply in Finland and for the so called critical industries in particular. The report summarizes the results of the Work Package 2 of the research project STOCA – “Study of cargo flows in the Gulf of Finland in emergency situations”. The aim of the research was to analyze the cargo flows and infrastructure that are vital for maintaining security of supply in Finland, as well as the consequences of disruptions in the maritime traffic for the Finnish critical industries and for the Finnish society.

In the report we give a presentation of the infrastructure and transport routes which are critical for maintaining security of supply in Finland. We discuss import dependency of the critical industries, and the importance of the Gulf of Finland ports for Finland. We assess vulnerabilities associated with the critical material flows of the critical industries, and possibilities for alternative routings in case either one or several of the ports in Finland would be closed. As a concrete example of a transport disruption we analyze the consequences of the Finnish stevedore strike at public ports (4.3.–19.3.2010). The strike stopped approximately 80% of the Finnish foreign trade. As a result of the strike Finnish companies could not export their products and/or import raw materials, components and spare parts, or other essential supplies. We carried out personal interviews with representatives of the companies in Finnish critical industries to find out about the problems caused by the strike, how companies carried out they transports and how they managed to continue their operations during the strike. Discussions with the representatives of the companies gave us very practical insights about companies’ preparedness towards transport disruptions in general.

Companies in the modern world are very vulnerable to transport disruptions because companies regardless of industries have tried to improve their performance by optimizing their resources and e.g. by reducing their inventory levels. At the same time they have become more and more dependent on continuous transports. Most companies involved in foreign trade have global operations and global supply chains, so any disruption anywhere in the world can have an impact on the operations of the company causing considerable financial loss. The volcanic eruption in Iceland in April 2010 stopping air traffic in the whole Northern Europe and most recently the earth quake causing a tsunami in Japan in March 2011 are examples of severe disruptions causing considerable negative impacts to companies’ supply chains. Even though the Finnish stevedore strike was a minor disruption compared to the natural catastrophes mentioned above, it showed the companies’ vulnerability to transport disruptions very concretely.

The Finnish stevedore strike gave a concrete learning experience of the importance of preventive planning for all Finnish companies: it made them re-think their practical preparedness towards transport risks and how they can continue with their daily operations despite the problems. Many companies realized they need to adapt their long-term countermeasures against transport disruptions. During the strike companies did various actions to secure their supply chains. The companies raised their inventory levels before the strike began, they re-scheduled or postponed their deliveries, shifted customer orders between production plants among their company’s production network or in the extreme case bought finished products from their competitor to fulfil their customers’ order. Our results also show that possibilities to prepare against transport disruptions differ between industries.

The Finnish society as a whole is very dependent on imports of energy, various raw materials and other supplies needed by the different industries. For many of the Finnish companies in the export industries and e.g. in energy production maritime transport is the only transport mode the companies can use due to large volumes of materials transported or due to other characteristics of the goods. Therefore maritime transport cannot be replaced by any other transport mode. In addition, a significant amount of transports are concentrated in certain ports. From a security of supply perspective attention should be paid to finding ways to decrease import dependency and ensuring that companies in the critical industries can ensure the continuity of their operations.