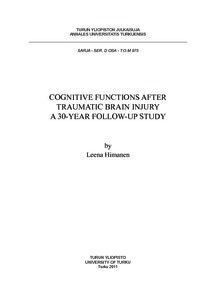 Many cognitive deficits after TBI (traumatic brain injury) are well known, such as memory and concentration problems, as well as reduced information-processing speed. What happens to patients and cognitive functioning after immediate recovery is poorly known. Cognitive functioning is flexible and may be influenced by genetic, psychological and environmental factors decades after TBI.

The general aim of this thesis was to describe the long-term cognitive course after TBI, to find variables that may contribute to it, and how the cognitive functions after TBI are associated with specific medical factors and reduced survival. The original study group consisted of 192 patients with TBI who were originally assessed with the Mild Deterioration Battery (MDB) on average two years after the injury, during the years 1966 – 1972. During a 30-year follow-up, we studied the risks for reduced survival, and the mortality of the patients was compared with the general population using the Standardized Mortality Ratio (SMR). Sixty-one patients were re-assessed during 1998-2000. These patients were evaluated with the MDB, computerized testing, and with various other neuropsychological methods for attention and executive functions. Apolipoprotein-E (ApoE) genotyping and magnetic resonance imaging (MRI) based on volumetric analysis of the hippocampus and lateral ventricles were performed. Depressive symptoms were evaluated with the short form of the Beck depression inventory. The cognitive performance at follow-up was compared with a control group that was similar to the study group in regard to age and education.

The cognitive outcome of the patients with TBI varied after three decades. The majority of the patients showed a decline in their cognitive level, the rest either improved or stayed at the same level. Male gender and higher age at injury were significant risk factors for the decline. Whereas most cognitive domains declined during the follow-up, semantic memory behaved in the opposite way, showing recovery after TBI. In the follow-up assessment, the memory decline and impairments in the set-shifting domain of executive functions were associated with MRI-volumetric measures, whereas reduction in information-processing speed was not associated with the MRI measures. The presence of local contusions was only weakly associated with cognitive functions. Only few cognitive methods for attention were capable of discriminating TBI patients with and without depressive symptoms. On the other hand, most complex attentional tests were sensitive enough to discriminate TBI patients (non-depressive) from controls. This means that complex attention functions, mediated by the frontal lobes, are relatively independent of depressive symptoms post-TBI.

The presence of ApoE4 was associated with different kinds of memory processes including verbal and visual episodic memory, semantic memory and verbal working memory, depending on the length of time since TBI. Many other cognitive processes were not affected by the presence of ApoE4.

Age at injury and poor vocational outcome were independent risk factors for reduced survival in the multivariate analysis. Late mortality was higher among younger subjects (age < 40 years at death) compared with the general population which should be borne in mind when assessing the need for rehabilitation services and long-term follow-up after TBI.