Understanding the Racial Nature of Police and Immigrant Relations In Finland. The Case of Africans in Turku 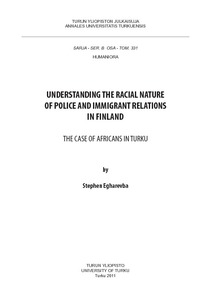 The focus of this study is to examine the role of police and immigrants’ relations, as less is known about this process in the country. The studies were approached in two different ways. Firstly, an attempt was made to examine how immigrants view their encounters with the police. Secondly, the studies explored how aware the police are of immigrants’ experiences in their various encounters and interactions on the street level. An ancillary aim of the studies is to clarify, analyse and discuss how prejudice and stereotypes can be tackled, thereby contributing to the general debate about racism and discrimination for better ethnic relations in the country. The data in which this analysis was based is on a group of adults (n=88) from the total of 120 Africans questioned for the entire study (n=45) police cadets and (n=6) serving police officers from Turku.

The present thesis is a compilation of five articles. A summary of each article findings follows, as the same data was used in all five studies. In the first study, a theoretical model was developed to examine the perceived knowledge of bias by immigrants resulting from race, culture and belief. This was also an attempt to explore whether this knowledge was predetermined in my attempt to classify and discuss as well as analyse the factors that may be influencing immigrants’ allegations of unfair treatment by the police in Turku.

The main finding shows that in the first paper there was ignorance and naivety on the part of the police in their attitudes towards the African immigrant’s prior experiences with the police, and this may probably have resulted from stereotypes or their lack of experience as well as prior training with immigrants where these kinds of experience are rampant in the country (Egharevba, 2003 and 2004a). In exploring what leads to stereotypes, a working definition is the assumption that is prevalent among some segments of the population, including the police, that Finland is a homogenous country by employing certain conducts and behaviour towards ethnic and immigrant groups in the country. This to my understanding is stereotype. Historically this was true, but today the social topography of the country is changing and becoming even more complex. It is true that, on linguistic grounds, the country is multilingual, as there are a few recognised national minority languages (Swedish, Sami and Russian) as well as a number of immigrant languages including English. Apparently it is vital for the police to have a line of communication open when addressing the problem associated with immigrants in the country.

The second paper moved a step further by examining African immigrants’ understanding of human rights as well as what human rights violation means or entails in their views as a result of their experiences with the police, both in Finland and in their country of origin. This approach became essential during the course of the study, especially when the participants were completing the questionnaire (N=88), where volunteers were solicited for a later date for an in-depth interview with the author. Many of the respondents came from countries where human rights are not well protected and seldom discussed publicly, therefore understanding their views on the subject can help to explain why some of the immigrants are sceptical about coming forward to report cases of batteries and assaults to the police, or even their experiences of being monitored in shopping malls in their new home and the reason behind their low level of trust in public authorities in Finland. The study showed that knowledge of human rights is notably low among some of the participants. The study also found that female respondents were less aware of human rights when compared with their male counterparts. This has resulted in some of the male participants focussing more on their traditional ways of thinking by not realising that they are in a new country where there is equality in sexes and lack of respect on gender terms is not condoned.
The third paper focussed on the respondents’ experiences with the police in Turku and tried to explore police attitudes towards African immigrant clients, in addition to the role stereotype plays in police views of different cultures and how these views have impacted on immigrants’ views of discriminatory policing in Turku. The data is the same throughout the entire studies (n=88), except that some few participants were interviewed for the third paper thirty-five persons. The results showed that there is some bias in mass-media reports on the immigrants’ issues, due to selective portrayal of biases without much investigation being carried out before jumping to conclusions, especially when the issues at stake involve an immigrant (Egharevba, 2005a; Egharevba, 2004a and 2004b). In this vein, there was an allegation that the police are even biased while investigating cases of theft, especially if the stolen property is owned by an immigrant (Egharevba, 2006a, Egharevba, 2006b). One vital observation from the respondents’ various comments was that race has meaning in their encounters and interaction with the police in the country. This result led the author to conclude that the relation between the police and immigrants is still a challenge, as there is rampant fear and distrust towards the police by some segments of the participating respondents in the study.

In the fourth paper the focus was on examining the respondents’ view of the police, with special emphasis on race and culture as well as the respondents’ perspective on police behaviour in Turku. This is because race, as it was relayed to me in the study, is a significant predictor of police perception (Egharevba, 2005a; Egharevba and Hannikianen, 2005). It is a known scientific fact that inter-group racial attitudes are the representation of group competition and perceived threat to power and status (Group-position theory). According to Blumer (1958) a sense of group threat is an essential element for the emergence of racial prejudice. Consequently, it was essential that we explored the existing relationship between the respondents and the police in order to have an understanding of this concept.

The result indicates some local and international contextual issues and assumptions that were of importance tackling prejudice and discrimination as it exists within the police in the country. Moreover, we have to also remember that, for years, many of these African immigrants have been on the receiving end of unjust law enforcement in their various countries of origin, which has resulted in many of them feeling inferior and distrustful of the police even in their own country of origin. While discussing the issues of cultural difference and how it affects policing, we must also keep in mind the socio-cultural background of the participants, their level of language proficiency and educational background. The research data analysed in this study also confirmed the difficulties associated with cultural misunderstandings in interpreting issues and how these misunderstandings have affected police and immigrant relations in Finland.

The result suggests that there is distrust of the police in the respondents’ interaction; this tends to have galvanised a heightened tension resulting from the lack of language proficiency (Egharevba and White, 2007; Egharevba and Hannikainen, 2005, and Egharevba, 2006b) The result also shows that the allegation of immigrants as being belittled by the police stems from the misconceptions of both parties as well as the notion of stop and search by the police in Turku. All these factors were observed to have contributed to the alleged police evasiveness and the lack of regular contact between the respondents and the police in their dealings. In other words, the police have only had job-related contact with many of the participants in the present study. The results also demonstrated the complexities caused by the low level of education among some of the African immigrants in their understanding about the Finnish culture, norms and values in the country. Thus, the framework constructed in these studies embodies diversity in national culture as well as the need for a further research study with a greater number of respondents (both from the police and immigrant/majority groups), in order to explore the different role cultures play in immigrant and majority citizens’ understanding of police work.