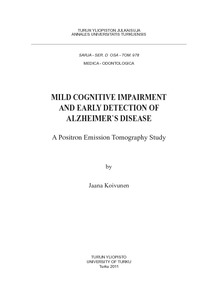 Alzheimer`s disease (AD) is characterised neuropathologically by the presence of extracellular amyloid plaques, intraneuronal neurofibrillary tangles, and cerebral neuronal loss. The pathological changes in AD are believed to start even decades before clinical symptoms are detectable. AD gradually affects episodic memory, cognition, behaviour and the ability to perform everyday activities. Mild cognitive impairment (MCI) represents a transitional state between normal aging and dementia disorders, especially AD. The predictive accuracy of the current and commonly used MCI criteria devide this disorder into amnestic (aMCI) and non-amnestic (naMCI) MCI. It seems that many individuals with aMCI tend to convert to AD. However many MCI individuals will remain stable and some may even recover. At present, the principal drugs for the treatment of AD provide only symptomatic and palliative benefits. Safe and effective mechanism-based therapies are needed for this devastating neurodegenerative disease of later life. In conjunction with the development of new therapeutic drugs, tools for early detection of AD would be important.

In future one of the challenges will be to detect at an early stage these MCI individuals who will convert to AD. Methods which can predict which MCI subjects will convert to AD will be much more important if the new drug candidates prove to have disease-arresting or even disease–slowing effects. These types of drugs are likely to have the best efficacy if administered in the early or even in the presymptomatic phase of the disease when the synaptic and neuronal loss has not become too widespread.

There is no clinical method to determine with certainly which MCI individuals will progress to AD. However there are several methods which have been suggested as predictors of conversion to AD, e.g. increased [11C] PIB uptake, hippocampal atrophy in MRI, low CSF A beta 42 level, high CSF tau-protein level, apolipoprotein E (APOE) ε4 allele and impairment in episodic memory and executive functions. In the present study subjects with MCI appear to have significantly higher [11C] PIB uptake vs healthy elderly in several brain areas including frontal cortex, the posterior cingulate, the parietal and lateral temporal cortices, putamen and caudate. Also results from this PET study indicate that over time, MCI subjects who display increased [11C] PIB uptake appear to be significantly more likely to convert to AD than MCI subjects with negative [11C] PIB retention. Also hippocampal atrophy seems to increase in MCI individuals clearly during the conversion to AD. In this study [11C] PIB uptake increases early and changes relatively little during the AD process whereas there is progressive hippocampal atrophy during the disease. In addition to increased [11C] PIB retention and hippocampal atrophy, the status of APOE ε4 allele might contribute to the conversion from MCI to AD.