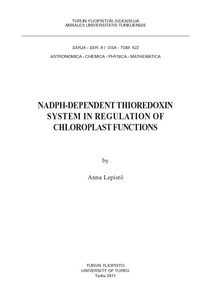 In this thesis, the role of NADPH-dependent thioredoxin system in the redox-control of chloroplast development and metabolism was studied by characterization of Arabidopsis thaliana T-DNA insertion lines of NTRC gene (ntrc) and by identification of chloroplast proteins regulated by NTRC. The ntrc plants showed the strongest visible phenotypes when grown under short 8-h photoperiod. This indicates that i) chloroplast NADPH-dependent thioredoxin system is non-redundant to ferredoxinthioredoxin system and that ii) NTRC particularly controls the chloroplast processes that are easily imbalanced in daily light/dark rhythms with short day and long night. I identified four processes and the redox-regulated proteins therein that are potentially regulated by NTRC; i) chloroplast development, ii) starch biosynthesis, iii) aromatic amino acid biosynthesis and iv) detoxification of H2O2. Such regulation can be achieved directly by modulating the redox state of intramolecular or intermolecular disulfide bridges of enzymes, or by protecting enzymes from oxidation in conjunction with 2-cysteine peroxiredoxins. This thesis work also demonstrated that the enzymatic antioxidant systems in chloroplasts, ascorbate peroxidases, superoxide dismutase and NTRC-dependent 2-cysteine peroxiredoxins are tightly linked up to prevent the detrimental accumulation of reactive oxygen species in plants.