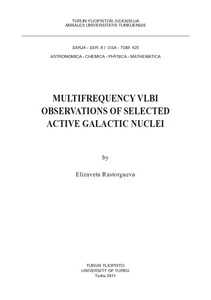 In this dissertation, active galactic nuclei (AGN) are discussed, as they are seen with the high-resolution radio-astronomical technique called Very Long Baseline Interferometry (VLBI). This observational technique provides very high angular resolution (_ 10−300 = 1 milliarcsecond). VLBI observations, performed at different radio frequencies (multi-frequency VLBI), allow to penetrate deep into the core of an AGN to reveal an otherwise obscured inner part of the jet and the vicinity of the AGN’s central engine. Multi-frequency VLBI data are used to scrutinize the structure and evolution of the jet, as well as the distribution of the polarized emission. These data can help to derive the properties of the plasma and the magnetic field, and to provide constraints to the jet composition and the parameters of emission mechanisms. Also VLBI data can be used for testing the possible physical processes in the jet by comparing observational results with results of numerical simulations.

The work presented in this thesis contributes to different aspects of AGN physics studies, as well as to the methodology of VLBI data reduction. In particular, Paper I reports evidence of optical and radio emission of AGN coming from the same region in the inner jet. This result was obtained via simultaneous observations of linear polarization in the optical and in radio using VLBI technique of a sample of AGN. Papers II and III describe, in detail, the jet kinematics of the blazar 0716+714, based on multi-frequency data, and reveal a peculiar kinematic pattern: plasma in the inner jet appears to move substantially faster that that in the large-scale jet. This peculiarity is explained by the jet bending, in Paper III. Also, Paper III presents a test of the new imaging technique for VLBI data, the Generalized Maximum Entropy Method (GMEM), with the observed (not simulated) data and compares its results with the conventional imaging. Papers IV and V report the results of observations of the circularly polarized (CP) emission in AGN at small spatial scales. In particular, Paper IV presents values of the core CP for 41 AGN at 15, 22 and 43 GHz, obtained with the help of the standard Gain transfer (GT) method, which was previously developed by D. Homan and J.Wardle for the calibration of multi-source VLBI observations. This method was developed for long multi-source observations, when many AGN are observed in a single VLBI run. In contrast, in Paper V, an attempt is made to apply the GT method to single-source VLBI observations. In such observations, the object list would include only a few sources: a target source and two or three calibrators, and it lasts much shorter than the multi-source experiment. For the CP calibration of a single-source observation, it is necessary to have a source with zero or known CP as one of the calibrators. If the archival observations included such a source to the list of calibrators, the GT could also be used for the archival data, increasing a list of known AGN with the CP at small spatial scale. Paper V contains also calculation of contributions of different sourced of errors to the uncertainty of the final result, and presents the first results for the blazar 0716+714.