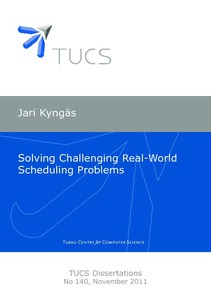 The PEAST algorithm is a product of long-term research and development. The first version of it was introduced in 1998. This thesis is a result of a five-year development of the algorithm. One of the most valuable characteristics of the algorithm has proven to be the ability to solve a wide range of scheduling problems. It is likely that it can be tuned to tackle also a range of other combinatorial problems.

The algorithm uses features from numerous different metaheuristics which is the main reason for its success. In addition, the implementation of the algorithm is fast enough for real-world use.